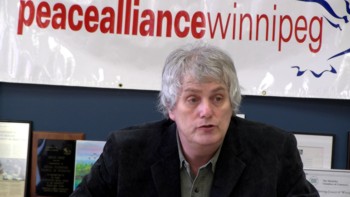 Winnipeg, Feb. 18, 2012: Glenn Michalchuk delivers his report on Peace Alliance Winnipeg activities in 2011 at the organization

Overall 2011 saw a continuation of the disturbing trend in Canadian foreign policy of actively supporting war on Iran, denial of Palestinian rights and a readiness to move anywhere in the world in support of U.S. interests.

Canada’s relationship in NATO has become a major threat to peace and security for Canadians and Canadian independence and sovereignty. NATO has become the prime instrument in preparations for the next major conflict between the world’s major powers. It links the member nations both politically and military. Since the conflict in Yugoslavia it has been a source of military intervention to ensure the hegemony of NATO in rivalry and contention with other world powers. We witnessed this in Libya when, not long after the last NATO bombs fell, the President of France and the Prime Minister of Britain (followed in short order by Canada’s John Baird and the U.S.’s Hilary Clinton) appeared in Tripoli to re-assert European, U.S. and Canadian domination of that country.

The first months of 2011 witnessed the upsurge in the Arab world against long established oppressive and undemocratic regimes. Winnipeg saw demonstrations by the Egyptian and Libyan communities that were joined by other Winnipeggers who supported the uprisings of the people in those countries.

In May activists from many organizations met and established the Winnipeg Coalition Against Israeli Apartheid. Peace Alliance Winnipeg joined with Independent Jewish Voices, Students Against Israeli Apartheid, Canada Palestine Support Network and others in taking this step forward in developing the campaign for instituting an international boycott and sanction of Israel for its treatment of the Palestinian people and denial of their right to nationhood.

In June a Canadian ship – the Tahrir – joined in the International effort to break the blockade of Gaza. Support for outfitting and manning the Tahrir was a pan-Canadian effort. The cross Canada speaking tour by George Galloway in the fall of 2010 helped raise funds for the Tahirir. Winnipeggers were part of this support when several thousand dollars were raised at George Galloway’s meeting in Winnipeg.

The Tahrir and other ships of the flotilla were not successful as they were prevented by Greek authorities from leaving the port. However, this act by the Greek Government prompted Canadian activists to organize public opposition in support of the flotilla and against the continuing blockade of Gaza. Peace Alliance Winnipeg was part of those actions. A demonstration held in Osborne Village was well received by people on the street as hundreds leaflets were handed out condemning the continued blockade of Gaza preventing the delivery of humanitarian aid.

The Annual Walk for Peace – long a part of Winnipeg peace activism – took on an added dimension in 2011 with the holding of the First Winnipeg International Peace Festival. The 30th Walk for Peace featured peace activist Jean Beliveau who took his campaign for peace on a 10 year journey around the world. By the time of the Annual Walk NATO intervention in Libya had become a major issue as Canadians could see that commitments to NATO were linked with a broader policy by NATO nations to exert domination and control through military means.

The 30TH Walk for peace and the Peace Festival reflect that our work is in co-operation with other organizations that are engaged on these issues as well. To that end we would like acknowledge the work of: Project Peacemakers, Canadian-Palestine Support Network, Independent Jewish Voices, Students Against Israeli Apartheid, Winnipeg Haiti Solidarity Group and the national and local organizations supporting war resisters. Together, with the Peace Alliance Winnipeg, collectively we have broadened the movement for peace in Winnipeg and in Manitoba. We hope — and there are indications that this will be the case — that the Peace Festival in 2012 will build on what was established in 2011.

In the later half of the year the Canadian Peace Alliance, of which Peace Alliance Winnipeg is a member, released an important call asking Canadians to reject the conditions of the current economic crisis. It is a fact that while billions are being funneled to war preparations and strengthening the repressive apparatus of the state cuts to social programmes, wages, pensions, etc are being contemplated or imposed through “austerity” budgets. The call of the Canadian Peace Alliance aptly frames this as PEACE AND PROSPERITY.NOT WAR AND AUSTERITY. It is estimated that for the cost of two of the F-35 aircraft the Canadian government is committed to purchase from the U.S. every senior living in poverty could be lifted out of that condition and given a proper standard of living.

Among the other important actions of the year was the annual Lantern Ceremony which commemorates the only use of atomic weapons against humanity when the U.S. dropped atomic bombs on Hiroshima and Nagasaki. This programme has evolved over the years and has now become an important statement about peace in the world as tensions and militarism continue to escalate. The annual Lantern Ceremony marks a significant collaboration between the Canadian Japanese Community, Peace Alliance Winnipeg and Project Peacemakers.

Last fall Peace Alliance Winnipeg along with Winnipeg Coalition Against Israeli Apartheid joined in action supporting the struggle of the Palestinian people and against the increasing danger posed by the policy of the U.S., Canada and the European Union in the Middle East. The area has come under even greater threat since Western interests have suffered a setback in the wake of the Libyan and Egyptian revolutions and the upheavals throughout the Arab nations for democratic change. In particular, Peace Alliance Winnipeg raised concern over the increasing drive for war with Iran. Like Afghanistan and Iraq – Iran stands at the epi-centre of U.S. concerns to dominate the middle east and hence the constant propaganda that Iran represents the greatest threat to peace and security.

Last year also saw the growing influence of a militaristic espirit de corps in every day life – from honouring Canada’s occupation and killing of thousands of Afghan civilians to celebrating its NATO mission in Libya. Winnipeg led the way in this respect with the re-launch of the Winnipeg Jets with a new logo and a new relationship that honours not the people of Winnipeg and their traditions and culture but that of the military. This relationship extends so far as to require the hockey team to promote the military as part of the “right” to use the fighter jet logo that was crafted for the team. While the media hype and promotion could not be stopped it is important to note that there was significant opposition to this.

Support for the people of Haiti continues to be an important aspect of our work. Whenever possible we support and work with activists of Winnipeg Haiti Solidarity Group on local initiatives. The people of Haiti forged the first genuine democracy more than 200 years ago by liberating themselves from French rule. Today the people of Haiti live under a new occupation by the United Nations but their spirit for liberation and self-determination will prevail.

Lastly I would like to conclude this report by noting that activists of the Peace Alliance Winnipeg share many common links and struggles. We have members who are actively engaged on the issue of Palestine, Haiti and building a new culture opposed to war and militarism here in Winnipeg. The Peace Alliance Winnipeg has genuinely helped to shape an effective movement of those concerned about the issues and what Winnipeggers should do.

Glenn Michalchuk is the chair of Peace Alliance Winnipeg.