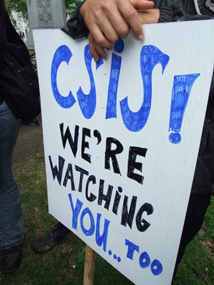 Montreal, 29 January 2012 — Almost seventy organizations have joined a call to end all cooperation with Canada’s spy agency, the Canadian Security Intelligence Service (CSIS). On the initiative of the Montreal-based People’s Commission Network, the campaign of total non-cooperation with CSIS was publicly launched at a press conference today. The organizations advise their members to neither speak nor listen to CSIS agents.

“For far too long we have tolerated the unacceptable activities of CSIS, whether through a false sense of loyalty or fear. We are here today to say that we will no longer voluntarily cooperate with CSIS when its agents come knocking on our doors or show up unannounced at our workplaces. We will not put ourselves, our neighbours, our friends, our families here or overseas, our organizations and our work for justice at risk by speaking with or listening to CSIS agents. We will say no to CSIS and yes to freedom from fear and political control,” said Marie-Eve Lamy, active in the People’s Commission Network.

Over the last decade, CSIS’s budget has increased by 140%, reaching $430 million in 2009. In 2010, the agency maintained almost 3000 employees. It also had information-sharing agreement with 147 countries. CSIS has been heavily involved in several Canadian cases of rendition to torture but has emerged from these and other scandals unscathed, protected by a broad mandate, laws assuring the secrecy of its operations, and lack of any real accountability.

“By questioning Arabs about their political views and about each other, and by implying that pro-Palestinian and anti-colonial perspectives are suspect, CSIS has in the past succeeded in sowing fear and silencing support for justice and freedom in the Middle East,” said Amy Darwish, an organizer with Tadamon! Montreal, which works for justice in the Middle East.

“Intelligence agencies have a tendency to view union activists as subversives; we cannot encourage informing, nor passing on information that could be used against people whose only fault is to want to have their rights recognized,” said Francis Lagacé, second vice-President of the Conseil central du Montréal métropolitain de la CSN.

“CSIS tactics create fear and isolation in our communities, particularly immigrant communities. In the face of their intimidation and racial profiling, migrant justice groups are responding with weapons of solidarity and support, aiming to render CSIS ineffective with a campaign of non-collaboration, while also supporting individuals pressured by CSIS during the immigration process,” said Jaggi Singh, a member of Solidarity Across Borders.

“Migrants, refugees, women in crisis are already insecure. CSIS exploits them, preying on their vulnerability. With this campaign of non-collaboration, we convey to them they are not alone; there are many of us working in solidarity to protect our communities; to protect one another,” said Dolores Chew, on behalf of the South Asian Women’s Community Centre.

The People’s Commission and its allies will be carrying out a series of activities over the next months to shine a spotlight on CSIS abuse and break the fear and isolation among those targetted by CSIS.