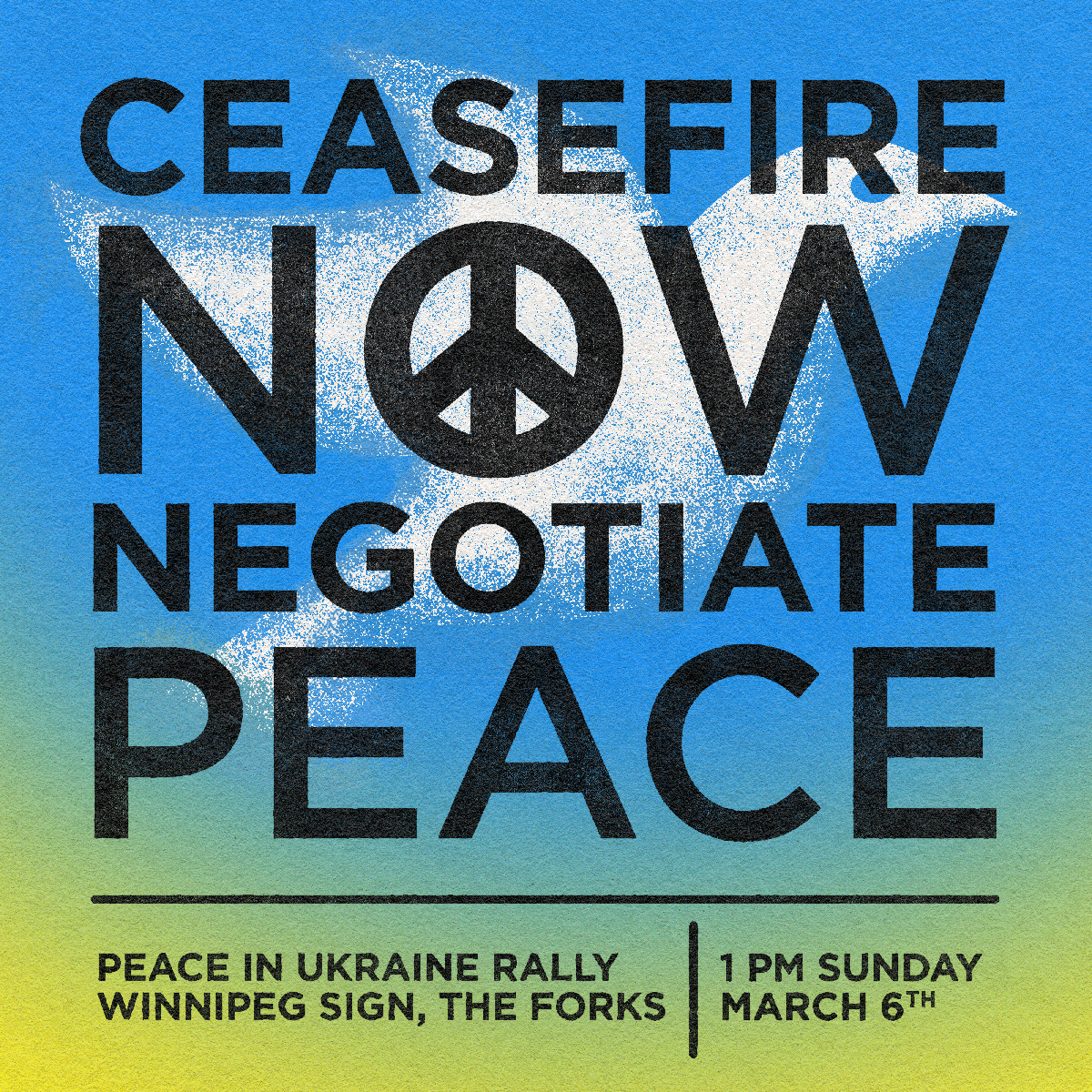 As the world watches the violence in Ukraine, it can be hard to see how we can restore peace. It can be even harder to understand how it came to this. Facts and understanding of the situation are obscured before a war breaks out and the problem is compounded when it does erupt. We have received many questions as to why this happened, who is to blame and what needs to be done. We will give our answers below. You won’t find easy ‘black and white’ explanations to the situation – we will leave that to the politicians who want to escalate this war.

1. What is happening in Ukraine?
After weeks of rising tensions, including Russian build-up of military forces on its borders with Ukraine, escalation of the Ukrainian army’s offensive in the regions of Donetsk and Luhansk (a civil war that has lasted 8 years), promises of support for Ukraine’s admission to NATO, a media barrage in the West about the rise of a “new Russian imperialism,” the funneling of arms into Ukraine from Canada and other western countries and, most importantly, the undercutting of diplomatic initiatives on the part of Germany and France, the stage was set for what we saw on February 24 as Russian forces moved into Ukraine. This is very brief but there are many other factors such as the failure to implement the Minsk Agreements which provided a path to stability and peace in Ukraine.

2. Russia attacked Ukraine first. Is this Russia’s fault?
This war is due to a failure to bring peace and security to Europe in the aftermath of the Cold War. It is a repeat of what happened at end of WWII when the opportunity for peace and security in Europe was squandered with the creation of the NATO military alliance which was followed in turn by the creation of the Warsaw Pact.

As the Soviet Union collapsed, the Warsaw Pact was disbanded in 1991. There was no threat in Europe as the economies and militaries of the former countries of the Warsaw Pact were in tatters. U.S. President George W. Bush and British Prime Minister Margaret Thatcher spoke of a “peace dividend” as economies could turn from supporting armies to social needs. That didn’t happen. In 1999, NATO began to expand into the former Warsaw Pact member states of Poland, Hungary and the Czech Republic and it has continued to include the possible membership of Ukraine.

Russia assembled its troops along Ukraine’s borders after years of aggressive military exercises by NATO and Russia had heightened tensions. Russia has been calling for NATO to stop military drills on its borders and raised concerns about the primarily Russian-speaking Donbass region of Ukraine where approximately 14,000 have died in the civil war that has been underway since 2014.

Rather than working to de-escalate tensions, NATO has consistently whipped up anti-Russian sentiment. All this while ignoring concerns from its own member countries, including Germany and France, about its handling of the tensions with Russia.

NATO expansion fueled a security crisis that has led to this war. Russia declared the potential admission of Ukraine as a ‘red-line.’ Sir Tony Brenton, former U.K. ambassador to Russia, said in an interview to the BBC just hours after the war began that the West failed to take into account Russia’s legitimate security concerns.

3. Is Canada a peacemaker in all this?
The Canadian federal government has promoted its role as an ally to Ukraine. But Canada can hardly be considered a peacemaker.

Canada is providing military aid. Through Operation Unifier, it has provided assistance and training to Ukrainian forces in preparation for admission to NATO. Through Operation Reassurance, Canada leads a NATO battle group in eastern Europe.

Canada has a history of interfering in Ukrainian politics and has even supported far-right political movements. Foreign affairs expert Yves Engler has detailed how our federal government:

4. What should Canada be doing instead?
Canada could improve the chances of peace by respecting Ukraine’s right to political autonomy and by pushing within NATO for a diplomatic, non-aggressive resolution.

5. Russia and the US have nuclear weapons. Should we be worried?
The nuclear threat is real. Letting the world and our government know that we do not support the use of lethal weapons, especially nuclear, is as important now as ever.

6. How do I know all of your points aren’t just propaganda?
Peace Alliance Winnipeg has a proud history of speaking truth to power. We want to bring attention to how militarism is always lose-lose for regular people like us, all over the world. We work with experts and study the issues carefully. Our focus is on Canada’s role on the world stage.

7. You’re a peace group, but is it realistic to expect a peaceful resolution?
Like war, peace is a commitment, a priority and a plan.

It’s not too late to pull back from war and reach a non-military solution. We are encouraged by the talks that took place starting February 27. Although talks have not yet been successful, we support a ceasefire while encouraging diplomatic solutions.

8. There are worse conflicts in the world. Why aren’t you working on those?
We agree that there are wars and attacks going on in many places – too many.
Peace Alliance Winnipeg regularly holds events to uncover and explore alternatives to militarism around the world.

We believe we have an important role to play in bringing analysis to the crisis in Ukraine. Most mainstream media outlets are not digging into the issues or providing balanced coverage or analysis of Canada’s role.

We will continue to support peace in Ukraine.

9. What can I do?
Stand up for peace. Join the call for an immediate ceasefire and immediate withdrawal of troops.

Hold Canada accountable. Ask our federal government to stop interfering in Ukraine. Canada would not want other countries actively supporting factions here – yet this is what Canada has done in Ukraine.

Keep asking questions – You can become more informed using some of the resources here.

Join Peace Alliance Winnipeg. You can find us on Facebook and at https://peacealliancewinnipeg.ca. Join us on March 6, 2022 for a Rally for Peace in Ukraine. Details here. 1991: The former Union of Soviet Socialist Republics (USSR) is broken up. Ukraine becomes an independent country.

1992: Ukraine expresses interest in joining NATO but does not join.

1994-2004: Ukraine transitions from a Soviet Republic to a capitalist society.

2004-2014: From 2004 to 2005, Ukraine’s national government is contested. After 3 recounts and the Orange Revolution, President Viktor Yushchenko is elected. Viktor Yanukovych was the other main contender. Yushchenko serves as President from 2005-2009.
President Yanukovych is elected in 2010.

During this period, Ukraine’s national government wavers between alliances with Russia and the West.

2014: President Yanukovych is deposed following mass Euromaidan protests in 2013-2014, after he backs away from a commitment to maintain Ukraine as a neutral country with ties to Russia and the West. He is seen as being pressured by Russia.

President Petro Poroshenko is elected after Yanukovych is exiled to Russia. Poroshenko’s rise to power included his TV news channel’s active support for the Euromaidan movement.

A referendum in Crimea results in Crimea seceding from Ukraine and joining the Russian Federation.

2019: President Volodymyr Zelensky is elected in Ukraine and seeks to join NATO.

US Foreign Policy Is a Cruel Sport
By Diana Johnstone

The Consequences of Humiliating Russia
By Michael Brenner

Condemn the invasion, but retain your critical faculties
By Yves Engler

The Russia-Ukraine War: Why the hawks prevailed
By Andrei P. Tsygankov

Chronicle of a War Foretold
By Chris Hedges

Russia’s at war with Ukraine. Here’s how we got here
By Becky Sullivan

A simple guide to the Ukraine-Russia crisis: 5 things to know
Al Jazeera Network

2 comments for “Behind the war in Ukraine”