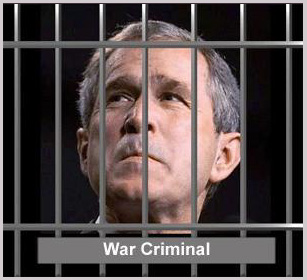 Former U.S. President George W. Bush is coming to Calgary to speak to the Rotary Club on March 17th on sixth anniversary of the invasion of Iraq. Peace and human rights activists are preparing to give him a welcome appropriate for a war criminal whose actions led to the deaths of over one million Iraqis, tens of thousands of Afghans and the destruction of two countries.

They are planning five events:

1) displaying banners on Stephen Avenue (which is a pedestrian road in downtown near where Bush is speaking) in the week leading up to him speaking. On one side they will have a wall of shame and on the other a wall of hope.

5) A cross-Canada shoe campaign: the shoes will be displayed around the perimeter of the “George Bush Go Home Rally” and at the conclusion of his trial. Organizers are also going to build a shoe-cannon that will fire shoes at a picture of Bush. 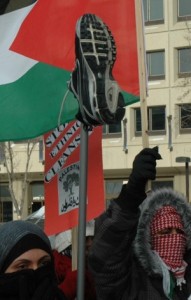 Peace Alliance Winnipeg encourages you to donate an old shoe to this campaign. You can include a note which will be posted on the wall of shame. If you bring your shoes to our March 7th human rights forum, Defending Human Rights in a post-9/11 World, we will ship them on your behalf.

Alternatively, you can send your shoes to Canadian Union of Postal Workers, Calgary Local, at:

To find out more about how you can support this action, visit their website.