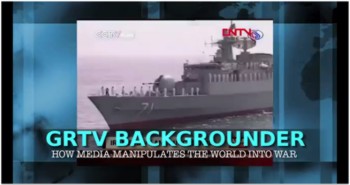 By James Corbett, The Corbett Report and Global Research TV

As the drums of war begin to beat once again in Iran, Syria, the South China Sea, and other potential hotspots and flashpoints around the globe, concerned citizens are asking how a world so sick of bloodshed and a population so tired of conflict could be led to this spot once again.

To understand this seeming paradox, we must first understand the centuries-long history of how media has been used to whip the nation into wartime frenzy, dehumanize the supposed enemies, and even to manipulate the public into believing in causes for war that, decades later, were admitted to be completely fictitious.

The term “yellow journalism” was coined to describe the type of sensationalistic, scandal-driven, and often erroneous style of reporting popularized by newspapers like William Randolph Hearst’s New York Journal. In one of the most egregious examples of this phenomenon, Hearst’s papers widely trumpeted the sinking of the Maine as the work of the Spanish. Whipped into an anti-Spanish frenzy by a daily torrent of stories depicting Spanish forces’ alleged torture and rape of Cubans, and pushed over the edge by the Maine incident, the public welcomed the beginning of the US-Spanish war. Although it is now widely believed that the explosion on the Maine was due to a fire in one of its coal bunkers, the initial lurid reports of Spanish involvement stuck and the nation was led into war.

In many ways, the phrase infamously attributed to Hearst in reply to his illustrator “You furnish the pictures and I’ll furnish the war,” apocryphal as the story may be, nevertheless perfectly encodes the method by which the public would be led to war time and again through the decades.

← Abdelrazik freed from “prison without walls”
Caplan: Solidarity, not charity →