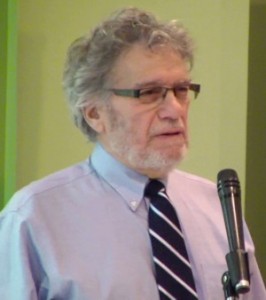 Gerry Caplan is a former CUSO field officer, author of The Betrayal of Africa, a weekly, online columnist for The Globe and Mail, and a featured television political commentator.

Caplan was the keynote speaker at a dinner held in Winnipeg December 10, 2011 to mark the 50th anniversary of CUSO and the 63rd anniversary of the adoption of the Universal Declaration of Human Rights by the United Nations on Dec. 10, 1948.

The title of his talk was advertised as “When good people do bad things.” The theme that emerged would be more appropriately described as “solidarity, not charity.”

This event was sponsored by the University of Winnipeg Global College, CUPE Manitoba, the Manitoba Council for International Co-operation and CUSO-VSO. It was held at the Union Centre in downtown Winnipeg.