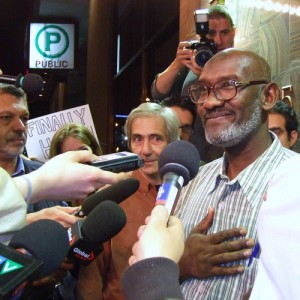 Profiled, put under intrusive surveillance, imprisoned, tortured, exiled, and blacklisted – Abousfian Abdelrazik’s story reads like a catalogue of the repressive tools of the Orwellian “war on terror.”  And he is still not free of the shackles placed on him by the Canadian state and its partners, the Sudanese dictatorship and the undemocratic UN Security Council. Abdelrazik remains on an international blacklist and continues to live under sanctions that freeze his assets, making it illegal for any Canadian to give him money – whether a gift, loan or salary.

For a year and a half, since Abdelrazik’s triumphant return home to Montreal in June 2009, Project Fly Home and its allies have focused on the Canadian government’s power and responsibility to stop applying sanctions on Abdelrazik and to withdraw from the Security Council’s blacklist regime. We have organized rallies and marches, met with all three opposition parties, organized lobbying campaigns, held public information events, pulled together a coast-to-coast speaking tour, responded to government misinformation, coordinated the Just Work campaign with unions, held a direct action sanctions-busting telethon and more. Abdelrazik has also launched a constitutional challenge to the legislation imposing the 1267 blacklist regime on Canadians.

We are now entering a new phase in our solidarity campaign.

On 25 January 2011, Abdelrazik submitted an individual delisting application to the “1267 Committee” (essentially, the United Nations Security Council) through the new ombudsperson. This set in motion a review process that could take between six and ten months. That is, Abdelrazik will get a response from the Security Council on his bid for freedom any time between 25 July 2011 and 25 November 2011 – less than five to nine months from now.

What is the ombudsperson? Faced with mounting criticism of its blacklisting regime, the Security Council embarked on a whitewashing exercise, creating, in December 2009, an ombudsperson mechanism to receive delisting requests from individuals. The first appointment, former Canadian Judge Kimberly Prost, was announced on 7 June 2010 – the very same day that Abdelrazik filed his constitutional challenge to the blacklist in Canadian courts.

The ombudsperson mechanism does not represent any real change to the 1267 regime’s delisting process. In fact, the ombudsperson is no more than a research assistant, tasked with gathering and checking information and writing a report. (Read the mandate for yourself – see Article 20 and Annex II.)

Her mandate provides her with no significant power over the outcome of a delisting application, not even the power to make recommendations. In the end, the decision to approve or reject a de-listing application remains entirely at the discretion of the fifteen states who are members of the Security Council, any one of whom can veto a de-listing application without being held to any standard and without any obligation to give any reason whatsoever for doing so. More seriously still, the basis of the list is as problematic as ever: the elastic concept of “association” with the favourite bogey-men of the “war on terror”. In other words, the delisting process remains a slave to the political considerations of states who have a track record of treating human lives as expendable.

This means that it is important, even crucial, to the success of Abdelrazik’s delisting application to use the following five to nine months to good purpose: mounting as much pressure as possible to support Abdelrazik’s application and publicly exposing the injustice and danger of the regime.

We are calling on allies everywhere to join in our solidarity effort, by whatever means they are best placed to use.

It is our hope and belief that all of our efforts over the next months will help to win freedom and justice for Abdelrazik, despite the enormous powers we are up against. But we also do it to fight for our own freedom. Nothing to lose but our chains!

CONTACTING YOUR FEDERAL MEMBER OF PARLIAMENT

Between March 14th and 25th, please phone or write your MP or, if your MP can’t be convinced, the Foreign Affairs critics of all three opposition parties, asking them to endorse the following short statement:

The UN Security Council imposes an asset freeze and an international travel ban on individuals whose names have been placed on its “1267 List”. The listing and delisting processes do not meet standards of procedural fairness or of natural justice fundamental to the rule of law. The 1267 Regime and the “Al Qaeda and Taliban Regulations” – which implement the 1267 Regime in Canada – violate rights to liberty, security and freedom of association.

CSIS and the RCMP cleared Abousfian Abdelrazik of any criminal activity in November 2007. On this basis, the Canadian government supported Mr. Abdelrazik’s request to be removed from the 1267 List.

For these reasons, I call on the Minister of Foreign Affairs to 1) lift sanctions from Mr. Abdelrazik in Canada (as was done in the case of another Canadian citizen, Mr. Liban Hussein, in 2002); 2) contact the embassies of all United Nations Security Council members to inform them that Mr. Abdelrazik’s removal from the 1267 List is a diplomatic priority for Canada; and 3) revoke the unconstitutional “Al Qaeda and Taliban Regulations”, which were established by Order in Council.

The contacts of federal MPs can be found here:

To help convince them, you can email them our backgrounder on the 1267 list  and two recent reports by human rights organizations; the BCCLA’s “The U.N. Security Council’s 1267 Regime and the Rule of Law in Canada” and the ECCHR’s “Blacklisted”, both linked to our website here.

Please forward the response of your MP to us at projectflyhome@gmail.com.

For more information about the People’s Commission Network:
http://www.peoplescommission.org
abolissons@gmail.com