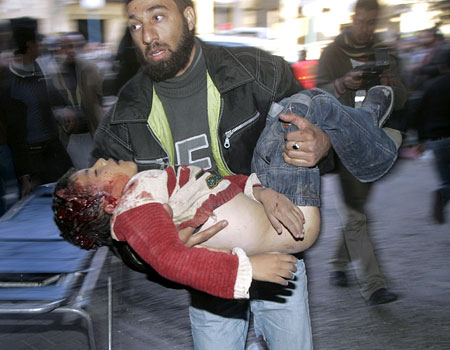 A boy wounded in Gaza City is taken to hospital during Israel’ “Operation Cast Lead” attack on Gaza. Photo: metro.co.uk

Israel is relieved not to be the only war criminal

The voice of joy, the voice of rejoicing is heard in Israel: The Americans and British have also committed for war crimes, not only us.

The voice of joy, the voice of rejoicing is heard in Israel: The Americans and British have also committed for war crimes, not only us. WikiLeaks’ revelations have inflamed all our noisy propagandists: Where is Goldstone, they rejoiced, and what would he have said? They were relieved. If the Americans are allowed to do it, so are we.

According to the logic of Israeli propagandists, some of whom are disguised as journalists, Israel should now proudly look at the rest of the world: They killed more people there. There is no need to improve prison conditions in Israel – in China the situation is much worse; there is no need to upgrade health services – in America 50 million people have no insurance; no need to reduce the gap between rich and poor – in Mexico it is greater; we can continue to assassinate without trial – the British also do it; human rights are protected here – the Iranians are much worse; Israel has no corruption – look what’s happening in Africa; the United States has the death penalty – let’s have it too; it is even permissible to kill dissident journalists – look at the Russians.