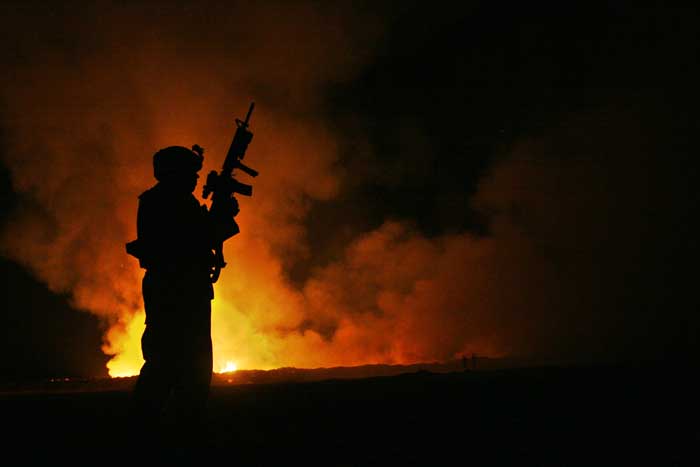 U.S. Marine Corps Sgt. Robert B. Brown, with Combat Camera Unit, Regimental Combat Team 6, watches over the civilian firefighters at the burn pit as smoke and flames rise into the night sky behind him in Camp Fallujah, Iraq, May 25, 2007.  U.S. Marine Corps photo by Cpl. Samuel D. Corum.

The American military is creating an environmental disaster in Afghanistan

The American military presence in Afghanistan consists of fleets of aircraft, helicopters, armored vehicles, weapons, equipment, troops and facilities. Since 2001, they have generated millions of kilograms of hazardous, toxic and radioactive wastes. The Kabul Press asks the simple question:

“What have the Americans done with all that waste?”

The answer is chilling in that virtually all of it appears to have been buried, burned or secretly disposed of into the air, soil, groundwater and surface waters of Afghanistan. While the Americans may begin to withdraw next year, the toxic chemicals they leave behind will continue to pollute for centuries. Any abandoned radioactive waste may stain the Afghan countryside for thousands of years. Afghanistan has been described in the past as the graveyard of foreign armies. Today, Afghanistan has a different title:

“Afghanistan is the toxic dumping ground for foreign armies.”

← Child trafficking in Iraq
The decline of the American empire →