All who draw the sword will die by the sword. 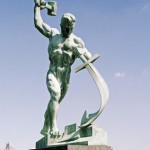 As we all know – or rather, as everyone but those who climb and claw their way to the top of power’s greasy pole knows – the effects of war are vast, unforeseeable, long-lasting — and uncontrollable. The far-reaching ripples of the turbulence will churn against distant shores and hidden corners, then roil back upon you in ways you could never imagine, for generations, even centuries.

Nor is “victory” in war proof against these deleterious effects. For the brutalization, moral coarsening, corruption and concentration of elite power that attend every war do not simply disappear from a society when the fighting stops. They persist, like microbes, in myriad forms, working with slow, corrosive force to degrade and deform the victors. Indeed, victory in battle often leads a society to enshrine war’s most pernicious attributes: violence is ennobled, and becomes entrenched as an ever-ready instrument of national policy. Militarism is exalted, the way of peace dishonored: cries of “Appeasers! Cowards! Traitors!” greet every approach that fails to brandish the threat of extreme violence, that fails to “keep all options on the table.”

The apparent “lesson” of victory – that there can be no right without armed might to win and safeguard it – quickly degenerates into the belief that armed might is right. Military power becomes equated with moral worth, and the ability to wreak savage, unimaginable destruction through armed violence — via thoughtless obedience to the orders of “superiors” – becomes a cherished attribute of society.

← Disturbing story of Fallujah’s birth defects
Say “No!” to war with Iran →