by Richard Sanders, Coalition to Oppose the Arms Trade 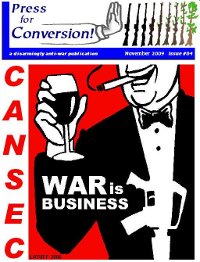 The Coalition to Oppose the Arms Trade (COAT) has just published a 50-page report called “CANSEC: War is Business.”

This latest issue of Press for Conversion! magazine, which marks COAT’s 20th anniversary, includes numerous articles and tables exposing Canada’s most profitable war industries and their complicity in the manufacture of dozens of major weapons systems used in Iraq, Afghanistan, Gaza and elsewhere.

Each issue of COAT’s publication highlights a different anti-war theme. If you don’t already subscribe, please do so! By subscribing, you’ll not only receive the next three issues with all their articles, tables, photos and cartoons, you’ll also be supporting our ongoing efforts to expose and oppose Canadian corporate and government complicity in US-led wars, invasions, occupations and regime changes.

Spread the word! Order copies of the current issue for friends, relatives, fellow activists and others. And, please consider subscribing, giving someone a gift subscription, or making a donation to assist COAT’s work. We can certainly use your help!

← Is Obama walking into an Al-Qaeda trap?
America’s Drug-Corrupted War →