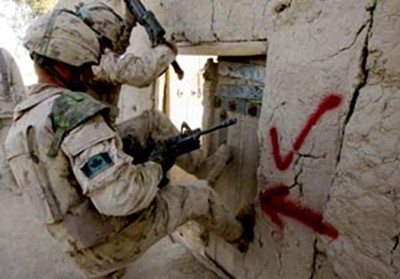 Conservative Party leader, Stephen Harper, attempted to remove questions about Canada’s role in Afghanistan from debate during the election campaign by announcing the combat role of the Canadian Forces will end, in 2011, if he is re-elected as Prime Minister.

But let’s be clear about what the current combat role entails. Many Canadian political and military leaders claim the current counterinsurgency war will help bring stability, development, democracy, and the liberation of women to Afghanis, which will in turn make Canadians and the people of the world safer. However, Canada is participating in a counterinsurgency war using tactics prohibited by international law. Canada is also participating in a global American-led war with obscured geopolitical and economic objectives. Canadian political leaders have put us in this position to curry favour with the United States and benefit a small minority of Canadians – primarily investors in Canada’s military industrial complex, the extractive industries, construction, transportation, communications, and other industries that can profit from war.

None of the Canadian political parties has produced a clearly focused foreign policy that most people – and not just people on the left – in Canada and Quebec can support in good conscience.

During the current election campaign, the leaders of all the political parties have avoided discussing the issues of the war in Afghanistan and its broad implications for Canadian foreign policy in any depth. The NDP, Green, and Bloc Québécois parties have at least produced platforms advocating withdrawal of Canadian combat troops from Afghanistan. The Conservatives and Liberals advocate holding the present destructive course until 2011.

1 comment for “The Canadian Election and the War in Afghanistan”