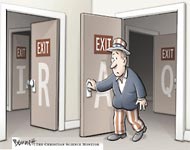 While the details of the negotiations have been largely unreported in English language media, it is generally known that that the American and Iraqi governments have been negotiating the terms of a US withdrawal, to begin sometime in 2009.

According to Patrick Cockburn, whose reports on Iraq are well-informed and authoritative, “The US and Iraq are close to agreeing a security accord under which the  US would pull its combat troops out of Iraqi cities, towns and villages on June 30, 2009 and out of Iraq by December 31, 2011. This will only happen  if a joint Iraqi-American ministerial committee agrees that security in Iraq  has improved to the point where the half million strong Iraqi security  forces can take over.”

US presidential hopeful Barack Obama has pledged to withdraw from Iraq, but there are caveats. According to the position outlined on Obama’s website: “Under the Obama plan, a residual force will remain in Iraq and in the region to conduct targeted counter-terrorism missions against al Qaeda in Iraq and to protect American diplomatic and civilian personnel. He will not build permanent bases in Iraq, but will continue efforts to train and support the Iraqi security forces as long as Iraqi leaders move toward political reconciliation and away from sectarianism.”

Obama’s Republican opponent, John McCain, promises (threatens) a more open-ended approach. On numerous occasions he has said America will remain in Iraq for as long as it takes to “defeat terrorism.” On his web site, he opposes “the policy advocated by Senator Barack Obama to withdraw most of our troops and leave behind only a small ‘strike force’ to battle terrorists.”

The American Friends Service Committee (see below) has published an English translation of a draft US-Iraqi agreement. Clearly, it is a work in progress.  At this point, it appears that any proposed US withdrawal from Iraq will have so many conditions attached as to be meaningless. US plans for military installations in Iraq represent a continued occupation, a denial of Iraqi sovereignty and a base for future wars in the region.

WASHINGTON, DC (Sept. 3) – At the end of 2008, the current U.N. mandate for the United States military presence in Iraq expires. Will the U.S. stay, or will it withdraw its troops?

An Arabic-language version of a draft agreement has appeared in media outlets in Iraq, but has not been reported on in the United States. The American Friends Services Committee today posts the first known public English translation.

Members of the U.S. and Iraq executive branches have worked to define what will happen with the U.S. troops, but neither government had announced an agreement.

Both the U.S. Congress and the Iraqi parliament have expressed strong resistance to such a measure.

The Iraqi parliament, in particular, opposes establishing such an agreement with an occupying power.

The agreement would have significant implications for the future of the U.S. military presence, permanent bases, and other aspects of continuing U.S. occupation in Iraq.

← Smoking in the arsenal
Why Canada should leave Afghanistan →