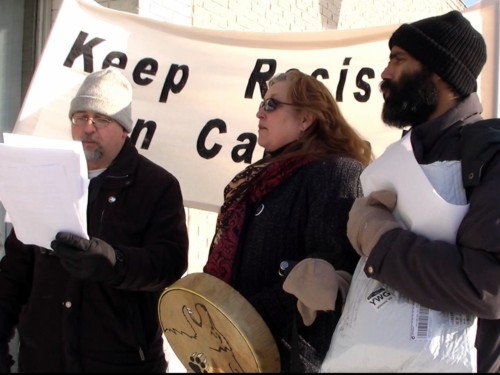 Supporters of the struggle of American war resisters in Canada picketed the Steinbach office of Canadian Public Safety Minister Vic Toews yesterday and delivered a letter requesting an emergency meeting with Toews and other Conservative Members of Parliament.The contingent consisted of members of the Keep Resisters in Canada Campaign, Peace Alliance Winnipeg, the Council of Canadians (Winnipeg) and Project Peacemakers along with war resister Joshua Key, his wife Alexina and their children. The action was part of Let Them Stay Week, a cross-Canada campaign to block the deportation of American war resisters.

Text of the letter

Our organisation, the Keep Resisters in Canada Campaign, is made up of friends and family of U.S. war resisters seeking refugee status in Canada. We are campaigning to build support in the Canadian prairie provinces to keep resisters to unjust wars in Canada.

We are writing to request a meeting with you to discuss your opinion of deporting U.S. war resisters from Canada back to the United States. Your government has deported two war resisters to date and each ended up serving lengthy jail sentences in military prisons, experiencing cruel treatment.

Several other resisters are in danger of deportation, so we would like to meet with you on an emergency basis. These are young people, many with young children and in dire need of health care from their own suffering in war.

We would also like to invite and would welcome the attendance of other Conservative M.P.s from Manitoba at this meeting, but our priority is to meet with you so that we exchange views and information.

In terms of your views, we would like to better understand your opinion of the following concerns:

1. The war on Iraq was an illegal war, not sanctioned by the United Nations and in violation of the UN Charter. What is your government’s view of this war?

2. No one in Canada would disagree with the Nuremberg principles (1950) that to plan a war of aggression is the “supreme international crime” and that it is not an acceptable excuse for a soldier to say “I was just following my superior’s orders.” How does your government respond to soldiers who disagree with governments and military officers who make criminal decisions?

3. Deporting deserters from the U.S. military during the Iraq war is a form of direct support for that war. What is the view of your government about this?

4. The invasion of Iraq was against international law and the reason provided by the United States for the invasion – Iraq’s possession of deadlier-than-usual weapons – has been proved false. On what basis would your government support a continued U.S. presence in the country?

5. The lengthy jail sentences meted out in the United States to deported war resisters indicates that the U.S. government will not or cannot protect genuine conscientious objectors or war resisters. In light of this, why would the Government of Canada not immediately stop deporting war resisters?

We look forward to your early response. We expect between four to five members of our group will be available to meet with you, including Joshua Key, his wife Alexina, and myself, Joshua’s mother-in-law.

Cheryl-Anne Carr
for the Keep Resisters in Canada Campaign