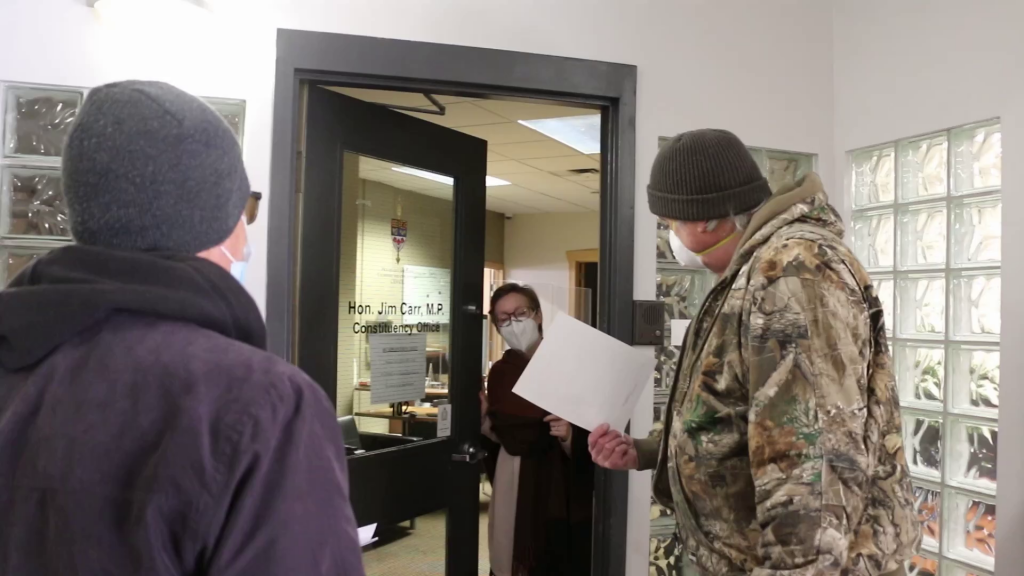 On April 8th, 2022, Winnipeg peace activists held an information picket in front of the office of Jim Carr, Liberal Member of Parliament for Winnipeg Centre and delivered their message to his office. The purpose of this action was to object to the Canadian government’s recently announced plans to spend 19 billion dollars on 88 new F-35 fighter jets and increase military spending by $6.1 billion over the next 5 years. Glenn Michalchuk spoke on behalf of Peace Alliance Winnipeg and Darrel Rankin spoke on behalf of the Manitoba Peace Council. Here is some of what they had to say.

Below is a copy of their press statement:

The prevailing view that enormous military alliances and budgets guarantee peace and stability is disproved by the Ukraine war.

The Stockholm International Peace Research Institute ranked Canada as the 13th highest military spender in 2020, easily among the top ten per cent of countries globally.

This will only reinforce existing global economic policies of rivalry that led to the present war, a war which is creating danger, hardship and uncertainty for all people.

Peace groups in Winnipeg oppose the hike in military spending.

One of the key beneficiaries of the Liberal budget is the military industry, largely based in the United States.

For example, the purchase of 88 F35 fighter jets from Lockheed Martin is unnecessary, economically harmful and dangerous. The Liberal government says the purchase price is $19 billion, but neglect to say the cost over a 30-year life cycle may reach an estimated $76.7 billion.**

These warplanes are not compatible with a defensive military doctrine protecting Canada’s territorial sovereignty.

Using past behaviour as an indicator, the Liberal government will use fighter jets in illegal wars of aggression, occupation and regime change.

It is time to reorient Canada’s foreign policies to respect for state sovereignty, mutually beneficial trade and respect for the right of national self-determination, which Canada violated in Ukraine’s coup d’etat and civil war since 2014, in Yugoslavia, Syria, Iraq and other countries.

This means Canada must not be a part of a military alliance like NATO that imposes arbitrary military budget commitments and whose member states practice regime change.

NATO’s original Cold War purpose to roll back and contain socialism disappeared more than thirty years ago. NATO and leading NATO member states, including Canada, have committed serious crimes of aggression in recent decades, from Yugoslavia and Afghanistan to Libya and Iraq – with impunity.

For all these reasons Canada must get out of NATO.