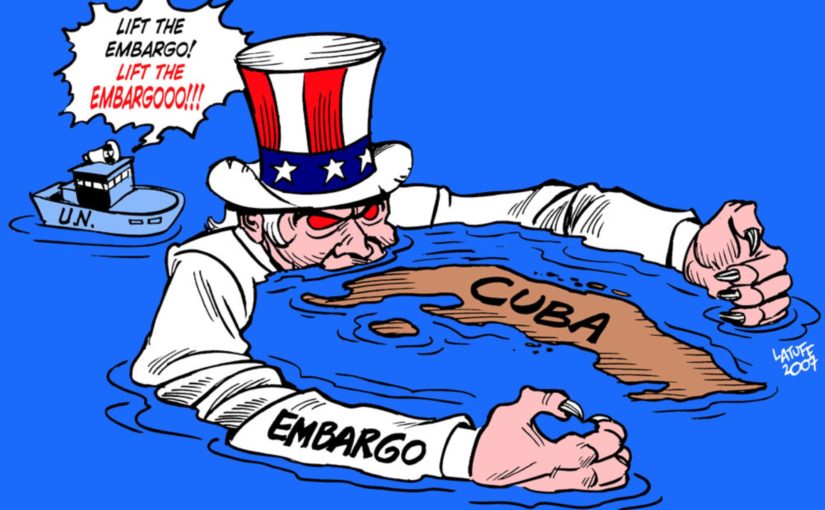 The Canadian Network On Cuba (CNC) vigorously and unequivocally condemns the deceitful and duplicitous designation of Cuba by the Trump regime as a sponsor of terrorism. This is an act of blatant opportunism and cynicism, an act that flies in the face of reality. It is Cuba that has been the victim of all manner of terrorist attacks that have been carried out against Cuba with the complicity, participation and sponsorship of Washington.

Since the triumph of the Cuban Revolution in 1959, Washington has waged an unceasing assault, both military and economic, against the Cuban people, organizing an invasion, assassinations, terrorist attacks against civilians and systematic economic sabotage. Many of these acts were directly launched from and/or planned in the United States. These acts of terror against Cuba, include the 1976 bombing of a civilian Cuban airliner that claimed the lives of 73 people and the 1997 Havana hotel bombings, which claimed the life of Fabio Di Celmo, a young Montrealer of Italian origin. As point of fact, 3,478 Cubans have been killed and 2,099 injured, as a result of these terrorists acts.

This contemptible move by the Trump regime reeks of desperation, reflecting Washington’s failure to isolate Cuba in international relations and public opinion. This failure is poignantly underscored by the international acclaim, accolades and gratitude that Cuba continues to receive for its singular role in the global fight against the COVID-19 pandemic, illustrated by the numerous nominations of Cuba’s internationalist medical contingent, the Henry Reeve Brigade, for the 2021 Nobel Peace Prize. Indeed, it is precisely, Cuba that shows the world a model of international relations that stands diametrically opposed to terrorism. It is a model based on creating and fostering relations between countries founded on genuine human solidarity.

The CNC stands with Cuba and the rest of the world in denouncing this latest despicable act of aggression against the heroic island nation. The CNC calls on the Canadian government to take a principled stand by rejecting this utterly immoral and self-serving hypocritical double standard that flagrantly violates international law. Despite this unacceptable and grotesque action by the U.S. government, the CNC is convinced that justice and truth will prevail in the end.

No to the Latest U.S. Aggression Against Cuba!
Justice and Truth Will Prevail!