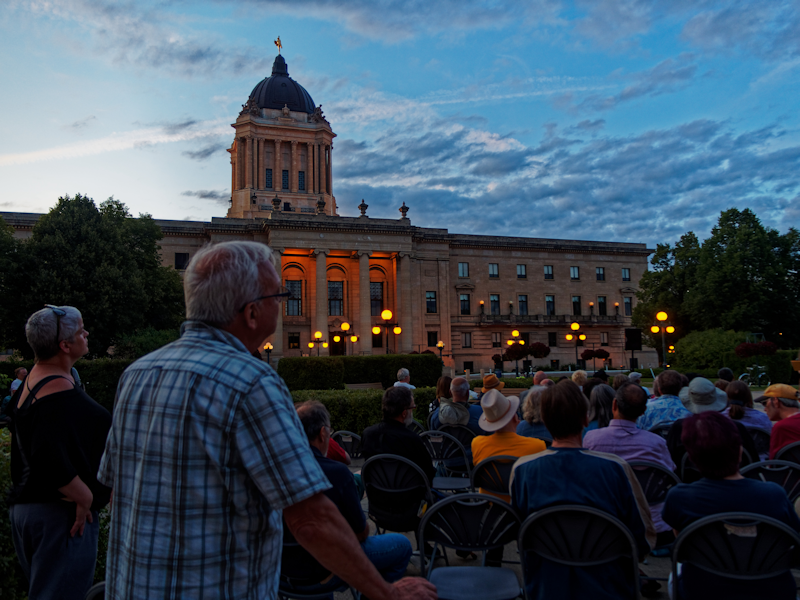 Aug. 6, 2019: Winnipeggers gather in the shadow of the Manitoba Legislative Building to commemorate the atomic bombings of Hiroshima and Nagasaki on Aug. 6 and 9, 1945. Lanterns for Peace is a ceremony that is held annually in Winnipeg and hundreds of cities worldwide. Photo: Paul S. Graham

Picking fights with Russia and China, backing fascists in Ukraine, arming murderers in Saudi Arabia, undermining democracy in Latin America — the Trudeau junta has a lot to answer for in the foreign policy realm. Trudeau the younger is not any worse than his predecessors (Liberal and Conservative) in this regard, but he appears to have given up trying to conform to that image of Canada the peacemaker and honest broker on the world stage. (It is a reputation Canada does not deserve, as my friend Yves Engler has demonstrated in many books and articles on the topic. I highly recommend a visit to his website.)

While I fully support the Green Party of Canada in its campaign to make climate change the defining issue of this election, there is another existential threat to human existence that deserves equal attention and that is the threat of nuclear war. Yes, global warming has the capacity to bring our civilization to an end, but so does the nuclear winter that would devastate world food production in the aftermath of a nuclear war.

Most of the world’s nations recognize this and two years ago approved the UN Treaty on the Prohibition of Nuclear Weapons at the July 7, 2017 meeting of the United Nations General Assembly.

Canada’s position is shameful. According to the International Campaign to Abolish Nuclear Weapons (ICAN), “Canada did not participate in the negotiation of the UN Treaty on the Prohibition of Nuclear Weapons. It voted against the UN General Assembly resolution in 2016 that established the mandate for nations to negotiate the treaty. It claims that US nuclear weapons are essential for its security.”

While 122 nations voted for the treaty, countries with nuclear weapons either abstained, voted against or declined to participate in the negotiation of the treaty, as did Canada’s fellow members of NATO.

So, if you share this concern, perhaps you can ask the candidates who want your vote if they would join with the saner members of the human race in adopting this treaty and work for world peace.

All of this is a longish introduction to a video I recorded this August 6th of the Winnipeg Lanterns for Peace Ceremony. We do this every year — gather somewhere close to water, construct floating lanterns that we launch as the sun goes down, and commemorate the first victims of the nuclear age — the citizens of Hiroshima and Nagasaki — who were either incinerated or permanently scarred by the atomic bombings of their cities on August 6 and 9, 1945. This commemoration never fails to move me.

Reposted with permission from paulsgraham.caa.

← The threat of the “new antisemitism”
Support the workers, peasants and indigenous peoples of Latin America! Oppose the Coup in Bolivia! →