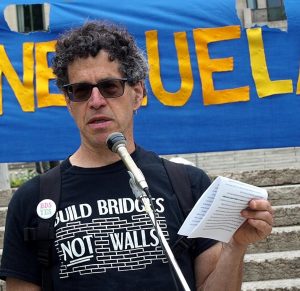 Good Afternoon. My name is Harold Shuster and I am with Independent Jewish Voices. IJV supports a just peace negotiated between the Israeli and Palestinian people and opposes any attempt by the Israeli government to impose its own solutions on the Palestinians. We further believe that individuals and groups within all communities should feel free to express their views on any issue of public concern without incurring accusations of disloyalty.
I was told that the land acknowledgements that we make at the beginning of these events are done not because it is the politically correct thing to do but because it speaks to the truth. And by speaking the truth we can understand the past and build a better future.

One regrettable truth is that we are living in an increasingly racist society. Racists and their irrational hate of “the other” is nothing new. What does feel different is a seemingly new found freedom for racists to openly and very publicly express their hate through words and deeds. A social contract that had kept many holding their views to themselves or only shared discretely, appears to have been shattered.

Antisemitism is a form of racism and must be opposed in solidarity with other anti-racist struggles. Unfortunately, both the government of Israel and Zionist groups the world over are manipulating legitimate concerns about antisemitism and attempting to politicize it. They are attempting to fight antisemitism by creating more things that they can label as antisemitic.

So why are they doing this? They are attempting to redefine the definition to include criticism of Israel and the Zionist ideology behind it. Their goal is to suppress — and even criminalize — criticism of Israel and support for Palestinian rights. They are desperately trying to intimidate and bully into silence any and all who dare question the actions or behaviour of the Israeli government. The weapon of choice for Israel and its supporters in this charade is the definition of antisemitism promoted by the International Holocaust Remembrance Alliance. A global campaign is underway to have this definition adopted by governments and legislatures at all levels, by departments within governments, as well as by universities, police forces and other public institutions.

Antisemitism is being weaponized by the government of Israel and Zionist organizations to beat back criticism of Israel, anti-Zionist and Palestinian rights discourses, and the Boycott, Divestment and Sanctions (BDS) movement. Intensive lobbying is underway to give the definition legal and administrative power, something it was never intended to have and for which it is totally unfit. Even the definitions author is opposed to its use as a legal or administrative definition, and has warned that such a use will be a threat to both academic freedom and freedom of expression in general.

The definitions pro- Israel agenda is clear. Seven of its eleven examples label criticism of Israel or Zionism as antisemitic. The Centre for Israeli Jewish Affairs states in its own press releases that adoption of this definition is part of its campaign to fight the “new antisemitism” wherein Zionism is an essential and core Jewish tenet, and that critiques of Israeli policies are motivated by antisemitism rather than a legitimate concern for Palestinians or for human rights.

I am here to urge you to join us in opposing this threat to academic freedom, freedom of expression and the right to peaceful non-violent protest.

You can find out more by going to the Independent Jewish Voices website at ijvcanada.org. You can go to the newly launched website dedicated to this campaign, noihra.ca. There you can find a full report on the threats posed by this definition of the “new antisemitism,” you can sign our petition opposing its adoption and sign up to get active in this fight.

← Canada must act for peace, not war
Make Peace an Election Issue →