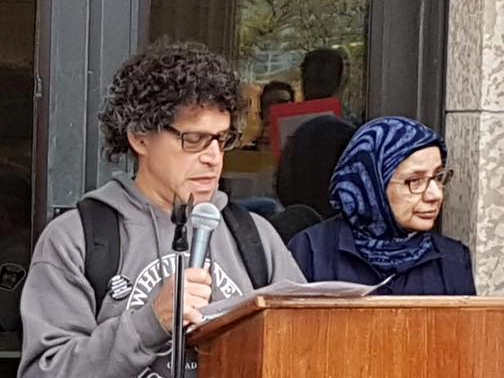 I was invited to speak at yesterday’s Rally for Burma. It was extended to me as a member of Independent Jewish Voices, and I was happy to be ‘representing’. Here is what I said:

I want to thank the organizers of today’s event for extending an invitation to Independent Jewish Voices to express our solidarity with the victims of Myanmar’s military actions.

IJV is a human rights organization whose understanding of what it means to be Jewish means to stand with the oppressed not the oppressor, whose interpretation of “Never Again” the rallying cry following the end of the Second World War includes everyone and not just Jews. Our Judaism taught us that justice, dignity and liberty could only exist if our neighbour also enjoyed it. We are Jews who are not afraid to raise our voices against the oppression and human rights violations of the Palestinians at the hands of the Israeli government and who know that before there can be peace in Palestine-Israel, there must first be justice for the Palestinian people. 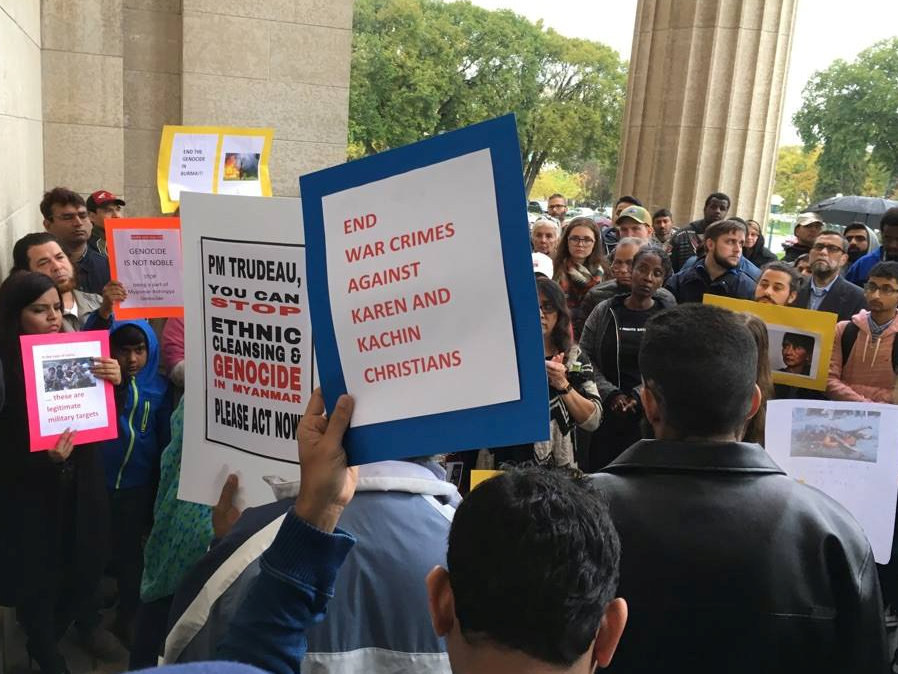 It is an honour for me to stand before you to express my outrage at what is happening to the Rohingya Muslims, Hindus, Karen, Chin Christians, Shan Buddhists and other religious and ethnic minorities in states through out Myanmar. As a people whose persecution at the hands of the German Nazis gave birth to the term holocaust, and who for centuries prior to that and to this day face racism and bigotry, I can empathize with those fleeing the scorched-earth campaign attempting to ethnically cleanse the Rohingya Muslims.

The racist events in Charlottesville displayed brazen inclusion of the Jews as targets for white supremacist wrath. Scenes of Nazis marching and chanting “The Jews Will Not Replace Us” are now seared into brains around the world. The inclusion of Jews as targets does not in itself make the incidents more serious. They are serious enough. We must not ignore — and we must and do — denounce the antisemitic aspects of white supremacy. But we must also not privilege anti-Jewish bigotry above any other type of bigotry and hatred.

And in Canada we are not immune to the rise of racist movements and neo-fascist thugs. A white shooter killed six and injured nineteen Muslims in a Quebec City mosque in January. Fascist recruitment posters had been seen at Laval University. A few hundred people showed up at a “Million Canadians” pro-Trump rally on Parliament Hill in June. “Proud Boys of Canada” disrupted a Halifax rally of indigenous people and allies in July. Storm Alliance members harass refugees crossing the boarders into Canada. And just this year, Jewish Defence League members from Toronto traveled to the AIPAC convention in Washington and beat up a Palestinian teacher.

The size and boldness and violence of the fascist activity in the US and Canada is extremely troubling. What used to seem a marginal and subterranean movement has quickly been given licence to take centre stage.

So I stand before you saddened, not simply because of what is happening to religious minorities in Myanmar but saddened by the fact that there is not a religious leader form the Jewish community in this city, and most other cities across the country, who could stand before you and say with honestly and sincerity, that what is happening in Myanmar must stop, and that is because of the 70 year old elephant in the room, the State of Israel. 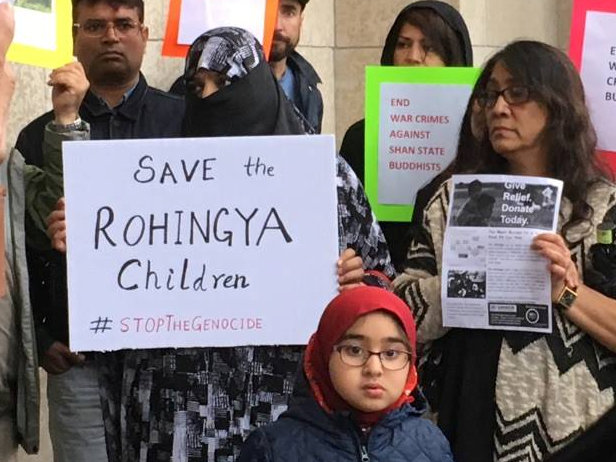 An issue that should trouble Jews profoundly is how the white supremacists can hate Jews but love Israel. In an interview with Israeli television, “alt-right” guru Richard Spencer declared himself a “White Zionist,” claiming only the same rights to exclusion for whites that Israel practices for Jews. Naomi Dann, of the group Jewish Voice for Peace, correctly points out: “ Spencer, whose racist views are rightfully abhorred by the majority of the Jewish community, is holding a mirror up to Zionism and the reflection isn’t pretty”.

Leaders in mainstream Jewish organisations have been muted or silent about this paradox and tepid in condemnation of non-Jewish racism. We need to hear Jewish voices on human rights issues like the inquiry into Missing and Murdered Indigenous women, the massive rates of incarceration and poverty among Indigenous and African-Canadians, the vilification of Muslims, and the ethnic cleansing of Rohingya Muslims and other ethnic minorities in Myanmar.

The best response of Jews to the recent events must not be to draw attention away from Muslims, refugees, people of colour, the LGBTQ, and Indigenous peoples by claiming a special and incommensurable Jewish hurt. The best, and only response is for Jews to stand together with these other targets of hatred and to fight alongside them. Despite the antisemitism of the white supremacists, Jews are enormously privileged in Canadian society and we should use that privilege to unite with others to combat all forms of prejudice and hatred.

It is time for Jewish Canadians to stand up for others.