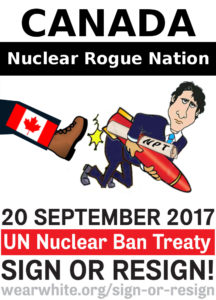 For more on this campaign go to https://wearwhite.org/sign-or-resign/

I am writing to you on behalf of Peace Alliance Winnipeg and its membership which has viewed with concern Canada’s vacillation on the question of nuclear disarmament and, in particular, as it concerns the Treaty on the Prohibition of Nuclear Weapons.

On July 7, 2017, the United Nations adopted the Treaty on the Prohibition of Nuclear Weapons. Of the 193 U.N. member states 122 voted for its acceptance. Canada, along with all the nuclear weapon states, was among the 69 nations that withheld their support by not voting. This included all the NATO member states except the Netherlands, which voted against, and all the states which possess nuclear weapons.

Canada’s refusal to support this treaty flies in the face of Canadian public opinion which has always overwhelmingly opposed nuclear weapons.

On September 20th, during the proceedings of the annual meeting of the U.N. General Assembly, the treaty opened for signatures at U. N. Headquarters in New York. The treaty will enter into force 90 days after it has been ratified by at least 50 countries.

At the ceremony inaugurating the opening of the ratification process, UN Secretary-General António Guterres said: “The Treaty on the Prohibition of Nuclear Weapons is the product of increasing concerns over the risk posed by the existence of nuclear weapons, including the catastrophic humanitarian and environmental consequences of their use.”

Canada has the opportunity and duty to fulfill its commitments to the Nuclear Non-Proliferation Treaty, which it signed in 1970, by now signing this new treaty. In doing so Canada would re-affirm its stand against nuclear weapons which led it to end all connections with nuclear weapons. In 1978, speaking at the United Nations, Prime Minister Pierre Trudeau declared: “We are thus not only the first country in the world with the capability to produce nuclear weapons that chose not to do so, we are also the first nuclear-armed country to have chosen to divest itself of nuclear weapons.” By 1984 the last U.S. nuclear weapons stationed in Canada were removed.

The Government of Canada should sign the Treaty on the Prohibition of Nuclear Weapons and join the majority of the world’s nations whose aim is to make a world free of nuclear weapons a reality.

To date, the Prime Minister’s office has not replied to this letter.

← Jews must unite with others to combat all forms of prejudice and hatred
Palestine News: Visit Your MP and Raise Awareness Through the No Way to Treat a Child Campaign →