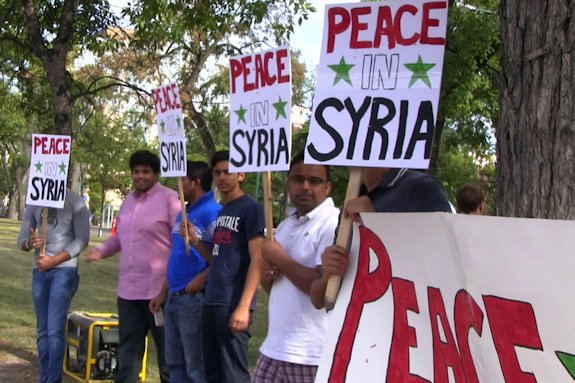 September 21, 2013 – For now, the threat of a US-led military strike on Syria has receded. Nevertheless, we cannot afford to be complacent. While the crisis is not currently front-page news, the slaughter continues inside Syria, and the US government has left no doubt that it will attack on the slightest pretext. With that intervention would come a wider war, one that could engulf the region and perhaps the world.

All who want a peaceful world must work for peace in Syria and resist the efforts of those who would drag us into yet another war. On International Peace Day, we must call upon our government to abandon its support for military intervention in Syria and instead to work for constructive, peaceful solutions.

We are not alone in our resistance to war. Recent polling in the United States, Britain and Germany, for example, shows that clear majorities oppose an attack on Syria. Even in France, the only major power to announce its willingness to join the US in an attack, public opinion is almost evenly divided.

Despite the US government’s most vigorous campaigning, the British Parliament voted against military intervention. The UN Security Council has refused to authorize a strike. NATO has ruled out military action.

British MPs voted against military action because the British people were well aware of the falsified British and American intelligence reports used to justify attacking Iraq in 2003.

That invasion caused the deaths of hundreds of thousands of Iraqis and almost 5,000 coalition troops. Four million Iraqis became refugees, the country’s infrastructure was destroyed and Iraqi society was fragmented by sectarian violence that continues to this day.

Canada has funnelled more than $5 million to opposition forces and endorsed the use of military force. While Stephen Harper has stated that Canada has no plans for a Canadian military mission “at the present time,” Canada has provided the US government with consistent political support.

Foreign Affairs Minister Baird’s response to the recent agreement to destroy Syrian chemical weapons is telling. Baird called it “ridiculous and absurd” showing that Canadian foreign policy is incapable of finding solutions other than through the politics of confrontation and force in the international arena.

The Syrian war is widening

The people of Syria have already suffered over two years of a devastating war, with more than a hundred thousand Syrians killed and millions driven from their homes. What began as a nonviolent protest and then civil war has expanded to sectarian and even more dangerous international conflict.

Syria is a battleground where conflicts are being fought out between regional powers (Saudi Arabia and Iran) and global powers (the US and Russia). A US military attack would worsen the conflict between heavily armed and powerful forces, seriously escalating the war and further destabilizing the Middle East.

Attacking Syrian forces with cruise missiles and drones, which is what the US government would like to do, would only add to the death toll and delay the peace negotiations that must ultimately bring this war to a close.

Even if, through some miracle, the violence remained contained within Syria, the price would still be paid by the Syrian people.

Antiwar sentiment is strong and growing

Earlier this month, there were antiwar demonstrations around the world. Protests were held in more than 12 Canadian cities, including Winnipeg.

Peace can be achieved, but only with a huge global response. In Canada, we can show our solidarity with the people of Syria by insisting that our government change its direction and work for peace.

What can we do, here, in Winnipeg?

1. Provide genuine humanitarian aid to the victims of the civil war in the form of food, medical supplies and financial contributions to the reputable humanitarian aid groups that have been stretched to the breaking point by this crisis.

2. End all forms of material and political support to opposition forces.

3. Adopt a genuinely neutral position on the world stage and press for peace talks that involve all of the contending forces.

Parliament must be reconvened to reverse the damage that our government has done by taking sides in this civil war. Canada has to become a responsible voice for peace in the Middle East and the world.

If you don’t know how to get hold of your MP, here are some phone numbers.