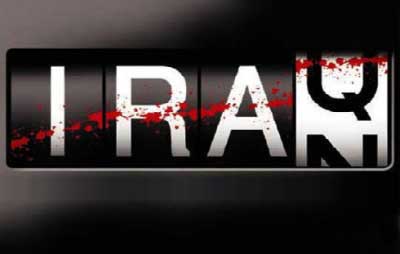 Almost ten years after the start of the Iraq War, we face the threat of another war. This time, the target is Iran. And the process that led to war nearly a decade ago is strikingly similar to the situation today. It started with sanctions, which our government insisted were a “humanitarian” alternative to war. But then there were air strikes and dubious claims about Weapons of Mass Destruction.

On March 20, 2003, the US launched a full-scale war against Iraq – without the support of the international community, and in clear violation of international law. The fact that no weapons were ever found in Iraq – and that the proof of their existence turned out to be false – renders the same accusation against Iran extremely questionable.

At stake today is the possibility of another disastrous war in the Middle East. Over 1.5 million Iraqis died because of sanctions, and over a million more have been killed since the war began in 2003. We must not be fooled into war with Iran, especially by arguments that have long since been discredited.

It is time to separate the myths from the facts.

There is no evidence that Iran is building a nuclear weapon. The most recent report on Iran’s nuclear program by the International Atomic Energy Agency (IAEA) contained no new evidence of a nuclear weapons program. Instead, it listed a series of technological developments that are mainly used for civilian purposes.

Meanwhile, the United States National Intelligence Estimate, which brings together intelligence from 16 federal security agencies, concluded that there is “no hard evidence that Iran has decided to build a nuclear bomb.”

Fears of nuclear proliferation are legitimate, but the real cause for concern has been deliberately obscured in this case. Nuclear proliferation will continue as long as those states that currently possess nuclear weapons, including the United States and Israel, refuse to comply with their international treaty obligations to disarm their own arsenals.

The fact that these two nuclear powers are also the main countries threatening Iran completely undermines their claims about trying to pursue peace in the region.

Myth #2: The people of Iran need the West’s help to build democracy in their country.

A cursory look at Iraq and Afghanistan – both of which have lived through years of US-led occupation – should put this myth to rest. NATO leaders often try to justify a military attack on “humanitarian” grounds, but this kind of response always leads to a crisis for civilians.

In Afghanistan, after 11 years of war and occupation, corruption and crime are more widespread than ever, women’s rights remain restricted, and the vast majority of Afghans still live in grinding poverty. NATO countries have spent billions in Afghanistan, but much of it has gone to Western corporations in the form of lucrative contracts.

Meanwhile, warlords and drug lords, and not the Afghan people, continue to dominate Afghanistan’s parliament. The outcome of war has been the opposite of democracy.

The Iranian people have a proud history of dealing with their own leaders. It is up to them to decide how they live and under what kind of government. That fate should not be decided in Washington, London or Ottawa.

Myth #3: Iran has threatened to attack its neighbours and must be stopped before it’s too late.

This is the most pervasive myth about Iran. For much of the last century, there have been numerous military attacks on countries in the Middle East. Since the end of World War II, almost all of them have been initiated by the United States or Israel – the same countries now threatening Iran. The US-led invasion of Iraq in 2003, Israel’s invasion of Lebanon in 2006, and Israel’s war on Gaza in 2009 are the most recent examples of large-scale wars in the region. In total, these attacks have killed, injured or displaced millions of people. This history shows that the real aggressor in the region is not Iran.

In fact, Iran is surround by almost 50 US military bases across the Middle East and Central Asia. Over 125,000 US troops are stationed in close proximity. Iran, on the other hand, has no military presence outside its borders.

Despite the overwhelming military presence of the US in the region, and Israel’s possession of nuclear weapons, Western leaders continue to insist that Iran remains a threat. They often cite the rough translation of a speech given by Iranian president Mahmoud Ahmadinejad in 2006, in which he allegedly calls for Israel to be “wiped off the map” – although the original Persian says no such thing. Regardless of one’s opinion of Ahmadinejad, the mistranslated content of a single speech should never justify a military attack.

Myth #4: Sanctions will stop Iran from building a nuclear weapon and will encourage the Iranian people to overthrow their government.

There is no evidence that Iran is building a nuclear weapon. Even if it were true, sanctions would not likely stop the process. The history of sanctions shows that they have a disproportionate effect on the poorest and most vulnerable civilians. During the decade-long sanctions regime in Iraq, more than half a million children died because of restricted access to food,
medicine and medical equipment. By contrast, sanctions did little to weaken the government of Saddam Hussein.

Just as the economic crisis in the developed world has affected middle- and low-income earners more adversely than those at the top of the income scale, sanctions will have little effect on Iran’s government. Far from being a more “humane” alternative to war, sanctions are a form of economic warfare that directly targets the people that the West claims it is trying to help.

Sanctions also have the effect of rallying people behind their own government, regardless of how unpopular it might be. As sanctions begin to bite, those most affected increasingly look to their leaders for relief.

Myth #5: A military strike on Iran would target nuclear facilities and would not harm civilians.

Protocol 1 of the Geneva Convention prohibits an attack on a nuclear facility, or any other target, “if such attack may cause the release of dangerous forces and consequent severe losses among the civilian population” (http://bit.ly/RKrtUK). An attack on a nuclear facility would cause massive damage to the local environment and countless civilian deaths in the vicinity.

Furthermore, the consequences of an attack would not be contained to Iran, as past wars have demonstrated. The entire Middle East and Central Asia is a powder keg; as it stands, the US can barely contain the opposition to its military presence in Iraq and Afghanistan, not to mention the opposition to its diplomatic presence across the region. A war against Iran would make
the situation worse, killing untold numbers in Iran, and possibly many more in the surrounding area.

What Can You Do?
Go to the Canadian Peace Alliance website where you will find flyers, posters, petitions, sample letters and all the material you need to build the campaign aganst the drive to war with Iran. While you are at it, send a letter to your MP and let them know that you are opposed to an attack. Make a donation to the CPA so we can stop this war before it starts!

Peace Alliance Winnipeg is holding an information picket on Oct. 6th, as part of an International Day of Action. Please join us.