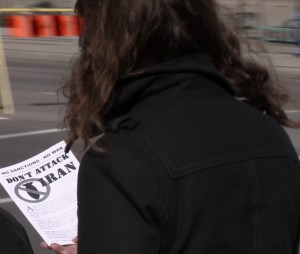 Growing concerns over the possibility of an attack on Iran by Israel or NATO countries prompted peace groups in six Canadian cities to join an International Day of Action yesterday. Locally, Peace Alliance Winnipeg held an information picket in Osborne Village Saturday afternoon. Members of the group distributed hundreds of leaflets that explained the basis for believing that the threat of war was escalating.

At the conclusion of the demonstration, Peace Alliance Winnipeg chairperson, Glenn Michalchuk, spoke about the growing war danger and the implications for Canadians.