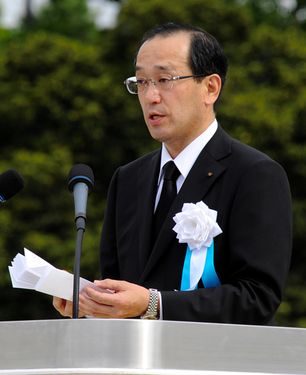 By Kazumi Matsui, Mayor, The City of Hiroshima

8:15 a.m., August 6, 1945. Our hometown was reduced to ashes by a single atomic bomb. The houses we came home to, our everyday lives, the customs we cherished–all were gone:

“Hiroshima was no more. The city had vanished. No roads, just a burnt plain of rubble as far as I could see, and sadly, I could see too far. I followed electric lines that had fallen along what I took to be tram rails. The tram street was hot. Death was all around.”

That was our city, as seen by a young woman of twenty. That was Hiroshima for all the survivors. The exciting festivals, the playing in boats, the fishing and clamming, the children catching long–armed shrimp–a way of life had disappeared from our beloved rivers.

Worse yet, the bomb snuffed out the sacred lives of so many human beings:

“I rode in a truck with a civil defense team to pick up corpses. I was just a boy, so they told me to grab the ankles. I did, but the skin slipped right off. I couldn’t hold on. I steeled myself, squeezed hard with my fingertips, and the flesh started oozing. A terrible stench. I gripped right down to the bone. With a ‘one-two-three,’ we tossed them into the truck.”

As seen in the experience of this 13-year-old boy, our city had become a living hell. Countless corpses lay everywhere, piled on top of each other; amid the moans of unearthly voices, infants sucked at the breasts of dead mothers, while dazed, empty-eyed mothers clutched their dead babies.

A girl of sixteen lost her whole family, one after the other:

“My 7-year-old brother was burned from head to toe. He died soon after the bombing. A month later, my parents died; then, my 13-year-old brother and my 11-year-old sister. The only ones left were myself and my little brother, who was three, and he died later of cancer.”

From newborns to grandmothers, by the end of the year, 140,000 precious lives were taken from Hiroshima.

Hiroshima was plunged into deepest darkness. Our hibakusha experienced the bombing in flesh and blood. Then, they had to live with aftereffects and social prejudice. Even so, they soon began telling the world about their experience. Transcending rage and hatred, they revealed the utter inhumanity of nuclear weapons and worked tirelessly to abolish those weapons. We want the whole world to know of their hardship, their grief, their pain, and their selfless desire.

The average hibakusha is now over 78. This summer, in response to the many ordinary citizens seeking to inherit and pass on their experience and desire, Hiroshima has begun carefully training official hibakusha successors. Determined never to let the atomic bombing fade from memory, we intend to share with ever more people at home and abroad the hibakusha desire for a nuclear-weapon-free world.

People of the world! Especially leaders of nuclear-armed nations, please come to Hiroshima to contemplate peace in this A-bombed city.

This year, Mayors for Peace marked its 30th anniversary. The number of cities calling for the total abolition of nuclear weapons by 2020 has passed 5,300, and our members now represent approximately a billion people. Next August, we will hold a Mayors for Peace general conference in Hiroshima. That event will convey to the world the intense desire of the overwhelming majority of our citizens for a nuclear weapons convention and elimination of nuclear weapons. The following spring, Hiroshima will host a ministerial meeting of the Non-Proliferation and Disarmament Initiative comprising ten non-nuclear-weapon states, including Japan. I firmly believe that the demand for freedom from nuclear weapons will soon spread out from Hiroshima, encircle the globe, and lead us to genuine world peace.

March 11, 2011, is a day we will never forget. A natural disaster compounded by a nuclear power accident created an unprecedented catastrophe. Here in Hiroshima, we are keenly aware that the survivors of that catastrophe still suffer terribly, yet look toward the future with hope. We see their ordeal clearly superimposed on what we endured 67 years ago. I speak now to all in the stricken areas. Please hold fast to your hope for tomorrow. Your day will arrive, absolutely. Our hearts are with you.

Having learned a lesson from that horrific accident, Japan is now engaged in a national debate over its energy policy, with some voices insisting, “Nuclear energy and humankind cannot coexist.” I call on the Japanese government to establish without delay an energy policy that guards the safety and security of the people. I ask the government of the only country to experience an atomic bombing to accept as its own the resolve of Hiroshima and Nagasaki. Mindful of the unstable situation surrounding us in Northeast Asia, please display bolder leadership in the movement to eliminate nuclear weapons. Please also provide more caring measures for the hibakusha in and out of Japan who still suffer even today, and take the political decision to expand the “black rain areas.”

Once again, we offer our heartfelt prayers for the peaceful repose of the atomic bomb victims. From our base here in Hiroshima, we pledge to convey to the world the experience and desire of our hibakusha, and do everything in our power to achieve the genuine peace of a world without nuclear weapons.

← Bring Omar Khadr home!
Hiroshima Peace Day: It is not enough to remember →