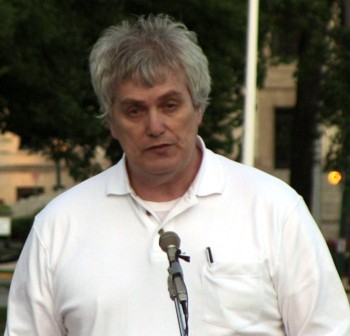 Sixty-seven years ago the world witnessed a new and even more deadly to consequence to war as atom bombs fell on the cities of Hiroshima and Nagasaki. Thousands of citizens still suffer the devastating aftereffects of radiation and unfathomable emotional pain. Today in Winnipeg and thousands of cities around the world people are gathering to mark the bombing of Hiroshima and Nagasaki with the traditional lantern ceremony.

However, it is not enough to remember. That is why the Lantern Ceremony has also been an occasion to reflect on the consequences of the war, the danger posed by nuclear weapons and the need to prevent war.

In 1986, the arms race reached its peak. At that time, the two super powers had some 70,500 nuclear weapons in their arsenals.

While the end of the cold war diminished the possibility of nuclear war the number and proliferation of nuclear weapons continues to be a major threat to the world’s peace.

The use of uranium as a weapon is not limited to the destructive force of nuclear warheads.

Depleted uranium which is highly toxic has been used in three of the major conflicts of this period. In Yugoslavia, Iraq and Afghanistan U.S and NATO forces have used depleted uranium. A Canadian research centre has found evidence of the use of depleted uranium in Afghanistan and the possibility the war was the testing ground for new uranium weapons.

The fact that Canadian armed forces were active in all those campaigns makes Canada complicit in using these devastating weapons. Canadian complicity also stretches back to the bombs dropped on Hiroshima and Nagasaki as Canadian uranium ore provided the necessary material to develop the bombs.

To prevent any repetition of the A-bomb tragedy, the cities of Hiroshima and Nagasaki have continually sought to tell the world about the inhumane cruelty of nuclear war. In 1982 at the 2nd UN Special Session on Disarmament the Mayor of Hiroshima announced the “Program to Promote the Solidarity of Cities toward the Total Abolition of Nuclear Weapons.” It called upon on cities to join together across national boundaries and work for the abolition of nuclear weapons. That initiative became known as the Mayors for Peace campaign which also has status as a UN NGO. As of August 1 the number of cities signed on to the Mayors for Peace stood at 5,312. It is significant to note that in 2003 the City of Winnipeg joined the Mayors for Peace campaign. It is one of 96 Canadian cities to have done so.

Mayors for Peace has a broad mandate to foster the co-operation amongst citizens of the member cities based on the fact that lasting peace and security requires solving problems such as hunger and poverty, refugees and human rights and environmental protection. Speaking for the Peace Alliance Winnipeg we would certainly encourage city council to be more active in the Mayors for Peace campaigns.

There is also the necessity for all of us to be actively engaged.

Since the 1990’s Canada has fought in four major wars – the first war against Iraq, the NATO wars in Yugoslavia, Afghanistan and most recently in Libya. Canada is one of the most vocal countries for intervention in Iran and Syria. Canada’s foreign policy has clearly shifted to being that of a protagonist in the international area. None of this augers well for peace and stability.

It is imperative that there be a strong peace and anti-war movement that can actually change the course Canada is on.

Therefore, on this occasion – which is based on the efforts of ordinary people around the world – let us commit to the cause of peace by taking steps to advance a people’s movement against war and for peace and security. That will mean different things to different people but all these actions taken together can forge a new direction. What is important is to speak out and join in the efforts being put forward by various groups and even individuals.