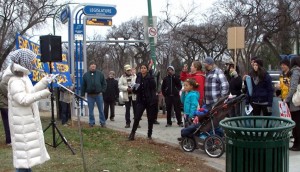 Members of the Canada-Palestine Support Network, Independent Jewish Voices, Peace Alliance Winnipeg, Students Against Israeli Apartheid and the Winnipeg Coalition Against Israeli Apartheid rallied at Osborne and Broadway Saturday afternoon to show support for the Freedom Waves Flotilla and to condemn the Harper government’s decision to cut funding to UNESCO after it voted to admit Palestine as a member.