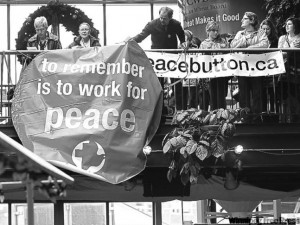 Local members of the Mennonite community marked Remembrance Day with a flash mob at The Forks that was organized through social media.

About 100 people staged a sedate gathering timed for 1:11 p.m. on the 11th day of the 11th month of 2011 to display a combined cross and dove they use in place of the poppy, and which is also the Mennonite Central Committee logo.

They unfurled a banner with their Remembrance Day emblem and sang a peace song from Africa to the beat of African drums.

The event was over in five minutes and they melted silently into the lunchtime throng at the food court.

The point of the event was to ask supporters to come, show the banner with the emblem, sing and then leave, organizers said, just as any other flash mob that was organized through Facebook or Twitter.

Katherine Hogue said she attended because it was a unique way to mark the emblem’s anniversary. “Our logo is, ‘To remember is to work for peace.’ When my children were little, they used to ask me what I wanted and I would say, ‘world peace.’ We live in hope.”

Organizer Steve Plenert, the peace program co-ordinator for the Mennonite Central Committee in Manitoba, said the event, which was also publicized in church bulletins, was organized with one message in mind: to pray for peace.