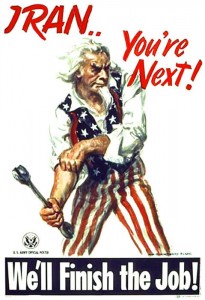 How many times have we heard in recent weeks either outright threats to attack Iran mainly emanating from Israel or the more muted posture adopted by the United States that leaves ‘all options’ on the table including ‘the military option’? What has Iran done to justify this frantic war-mongering in a strategic region that is sorting out the contradictory effects of the long Arab Spring and is the contested site of energy geopolitics that has replaced territory and minerals as the core issue of world politics?

As a matter of historical context, it is worth observing that the Western military interventions of recent years, Iraq and Libya, were both in oil-producing countries, devastating the country to achieve regime change, which remains the central tenet of the neocon/Netanyahu vision for a reconfiguration of power in the Middle East. It follows that Iran remains the only oil producer in the region that refuses to play nicely with West, and has been sanctioned to some degree ever since it achieved an anti-Western regime change back in 1979. In this setting of pre-war hysteria — pouring the fuel of rumor and threat on the fire of belligerent diplomacy — I have no intention of discounting the grievances of those who bravely opposed the theocratic regime from within after the fraudulent elections of June 2009 in the shape of the repressed Green Movement, but it is beside the point in the present debate.

Why talk of oil if the war momentum is explicitly preoccupied with the alleged effort by Iran to obtain nuclear weapons? Let the facts speak for themselves. Where there is oil and an anti-Western government in power, recourse to the military option follows, or at least an insistence on sanctions that aim to be crippling and regime-changing. Just as in Iraq, the smokescreen in 2003 were its stockpile of weapons of mass destruction, and when that war justifying scenario was discredited, democracy and human rights abruptly took over as the strategic rationale. Not to be overlooked, of course, was backroom Israeli pressures to destroy the Baghdad regime of Saddam Hussein, as well as the oil, involving both favourable access to the oil fields and some leverage over pricing. We all need to be reminded over and over again that Western prosperity rested on cheap oil, and its future prospects crucially depend on reliable supplies of oil at moderate prices. We need to be reminded because as Donald Rumsfeld once reassured the world, ‘America doesn’t do empire.’ Really! Concerns about oil security in the future are the real unacknowlegeable threats to the security of the West!

Such illicit interventionary diplomacy should be unmasked. For once we can look to Moscow for a benign clarification. The Russian Deputy Foreign Minister, Gennady Galitov, was quoted as follows: “The world community will see additional sanctions against Iran as an instrument of regime change in Tehran. We cannot accept this approach.” The plausibility of this interpretation is given further credibility by Iranian exile voices calling for targeting Iran’s central bank and currency with the avowed intention of bringing such hardship to the people of Iran as to mount destabilizing pressures from below on the Tehran government. The leader of the Green Movement, Mir Hossein Mousavi, has repeatedly spoken against international sanctions, insisting that they hurt the people of Iran and strengthen the hold of the government on the population. The struggle for Iranian self-determination must be waged by the Iranian people, not their self-interested patrons from without. Such patrons heeded in the Iraq case, and recently influential in the Libyan case as well, contribute to a war making process that leaves their country in shambles. True, the West is at first ready, but not able, to pick up the pieces. The result is continuous unresolved violent conflict, acute and widespread human insecurity, followed by eventual abandonment of the post-war reconstructive commitment. Iraq is tragically illustrative.