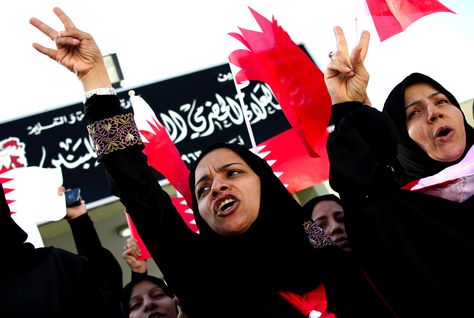 WASHINGTON, Sep 29, 2011 (IPS) – More than a dozen U.S. and international human rights and arms control groups are urging Congress to block a proposed 53- million-dollar arms sale to Bahrain, which hosts the U.S. Fifth Fleet, until it ends its crackdown against the opposition and adopts serious reforms.

In a letter sent to lawmakers Wednesday, the groups, which include Human Rights First (HRF), Human Rights Watch (HRW), and the Open Society Policy Centre, said Washington risked losing more credibility, particularly in the Arab world, as a force for freedom if it went through with the sale.

“This prioritisation of security interests over political reform stands in stark contrast to President (Barack) Obama’s declaration of support in May to those protesting for freedom throughout the region, when he said: ‘If you take the risks that reform entails, you will have the full support of the United States,'” according to the letter.

“The people Bahrain have taken those risks for reform,” the letter added, noting that protests in the tiny kingdom last February “were the largest of the Arab Spring …(r)elative to the country’s size.”

The letter’s release coincided with Thursday’s sentencing by a Bahraini military court of 20 doctors and other health professionals who treated injured protestors during the pro-democracy protests that erupted against the government of King Hamad bin Isa Al-Khalifa earlier this year.

The defendants, who were charged with stealing medicine, stockpiling weapons, inciting hatred against the government and occupying Manama’s Salamaniya Medical Complex, face between five and 15 years in prison.

Those sentences, as well as the affirmation by a special security court Wednesday of life sentences for eight prominent Shiite political figures who helped lead the protests, will almost certainly add to sectarian tensions in Bahrain and intensify the debate within both the administration and Congress here about how best to press the royal family, who are Sunni Muslims, toward a more conciliatory stance vis-à-vis majority Shi’a population.

“We’re deeply disturbed by the severity of the sentences handed down today,” a State Department spokesperson told IPS regarding the sentencing of the health professionals, a number of whom reportedly confessed under torture.

“We’ve raised our concerns at the highest levels of the Bahraini government regarding Bahrain’s use of military courts to try civilians, and we continue to urge it to abide by its commitment to transparent judicial proceedings and due process conducted in full accordance with Bahraini law and its international legal obligations,” he added.

“We call on the government of Bahrain to create a climate conducive to national reconciliation, meaningful dialogue, and reform that … brings peaceful change that is responsive to the aspirations of all Bahrainis.”

In relation to the arms transfer, he also said, “We have closely monitored the internal security situation in Bahrain since the civil unrest that occurred earlier this year, and we continually examine all relevant information to fulfil our obligations under the Leahy law.”

The Leahy law forbids the transfer of any military aid or equipment to military or security units that are credibly reported have committed human rights abuses.

Thursday’s sentences were also condemned by a host of human rights groups here. Physicians for Human Rights (PHR), which also signed the letter to Congress, called the sentences “unconscionable”, while Amnesty International assailed the original guilty verdicts and prison sentences against the medical personnel, insisting that the charges against them were “ludicrous”.

Although the Obama administration initially denounced the Bahraini government’s crackdown against the pro-democracy movement when it first broke out last February, Washington has been relatively quiet since mid-March when it objected publicly to the dispatch of some 1,500 troops and police from Saudi Arabia and the United Arab Emirates to Bahrain in support of the regime.

Washington’s reticence has been attributed primarily to its geostrategic interests; specifically, the continued use and planned expansion of its naval base in Bahrain, and its desire to avoid further straining ties with Riyadh.

Already angry over what it regarded as Obama’s abandonment of Egyptian President Hosni Mubarak, Saudi Arabia was further aggravated by Washington’s initial support for the opposition’s demands for democratic reform.

Such reform, in Riyadh’s view, risked empowering Bahrain’s Shi’a majority which, in turn, could spur similar protests among the Shi’a population in Saudi Arabia’s oil-rich Eastern Province and strengthen Iran’s influence and position in the Gulf.

At the same time, U.S. officials have been worried that Manama’s repression would radicalise the Shi’a population, which is believed to make up about 70 percent of the kingdom’s citizenry, and drive it closer to Iran.

For most of the past year, Washington quietly tried to promote the position of Crown Prince Salman bin Hamad bin Isa Al-Khalifa, who is regarded as a reformist. But he has been “effectively sidelined” by the king’s hard-line uncle, Prime Minister Khalifa ibn Sulman al- Khalifa, according to a recent paper by Gulf expert Thomas Lippman. Backed by Riyadh, the prime minister has held his post since Bahrain’s independence from Britain in 1971.

Under his leadership, the repression has been sustained. More than 40 people have been killed, most of them in the first weeks of the demonstrations. More than 1,600 people have been arrested and many of them have been abused or tortured while in custody, according to local and international human rights monitors.

Moreover, the authorities have carried out what the letter to Congress called “a large-scale campaign of retribution against anyone supporting or participating in protests, including arrests and detentions of internationally respected human rights activists, medical professionals… journalists and bloggers reporting on protests, and union activists and other workers calling for a boycott to address grievances in the workplace.”

More than 2,500 people have been fired from their jobs, and more than 40 Shi’a mosques and religious sites have been destroyed in raids that have also targeted Shi’a neighbourhoods and villages.

Nonetheless, the administration notified Congress two weeks ago that it intends to sell 53 million dollars worth of military equipment to Bahrain, mostly armoured Humvees, which could conceivably be used by the kingdom’s security forces against protestors, and anti-tank missiles.

In its notification, the Pentagon asserted that the sale “will contribute to the foreign policy and national security of the United States by helping to improve the security of a major non-NATO ally that has been, and continues to be, an important force for political stability and economic progress in the Middle East.”

Under the law, Congress can block the sale by passing a joint resolution of disapproval, a procedure that has very rarely been invoked.

In the letter, the groups, which also included the Project on Middle East Democracy (POMED), the Norwegian Forum for Environment and Development, and the Friends Committee on National Legislation (FCNL), urged lawmakers to “request a formal briefing from the Department of State on how this sale will affect the process of political reform and accountability for serious human rights violations in Bahrain, and how (it) will affect public sentiment toward the United States and its presence in Bahrain.”

In his report, which was published this week by POMED, Lippman called for the administration to send a high-level official to Bahrain “in the coming weeks” to publicly express the administration’s concern about ongoing human rights abuses.

He also suggested that the Pentagon “explore and develop alternative locations for Fifth Fleet headquarters, and let the Bahraini government know, discreetly, that this activity is taking place.”

*Jim Lobe’s blog on U.S. foreign policy can be read at http://www.lobelog.com.

Reposted with permission from IPS.