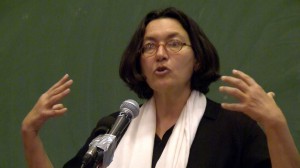 “Inhuman, immoral and unsustainable” are the words used by Amira Hass to describe what she terms “the State of Israel and the privileges it endows to Jews only, at the expense of Palestinians.”

Hass was at the University of Winnipeg Sept. 30, to provide a unique perspective on the Palestinian struggle, that of an Israeli Jew, a woman and a journalist for Haaretz, who has lived and worked in either Gaza or the West Bank for the past 17 years.

Hass was forceful in her denunciation of the conditions under which Palestinians live and uncompromising about the need to end the occupation and restore the rights of Palestinians in Israel and the occupied territories. What especially caught my attention, however, was her diplomatic yet unmistakable suggestion that activists outside of Israel take stock of their own societies and refrain from applying a double standard toward Israel.

“I’m fully aware that I’m speaking here mostly to the privileged. You are also a settler society that owes a large part of its affluence and comfortable life to the disenfranchisement of native peoples,” Hass said early in her presentation. She continued, “I also know that many who are engaged in the struggle for justice for Palestine are aware of it and probably some of you are part of the struggle to undo some of the damage that your communities, that your society, has inflicted on the First Nations.”

Hass returned briefly to this theme late in her presentation. While she expressed profound regret that she and other Israeli activists had not succeeded in convincing fellow citizens to end the suppression of Palestinians, she advised activists to get a sense of proportion.

If you look at the map Hass used in her presentation (click for a larger view) it would seem that the Israelis have borrowed the Canadian playbook – force the aboriginal peoples onto isolated parcels of land, compel them to live in poverty and control every aspect of their existence until they lose the will to resist. The main difference in this regard is that we’ve been doing this to “our” native peoples for a much longer time.

My take-away from Amira Hass’s presentation: stand up for Palestinian rights, but remember your responsibility for stand up for aboriginal rights in Canada.

Please share this video widely, especially with those who have imbibed deeply at the well of Israeli propaganda. For them, it could be an eye-opener.