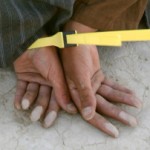 KABUL, Afghanistan — Suspects are hung by their hands, beaten with cables, and in some cases their genitals are twisted until they lose consciousness in detention facilities run by the Afghan intelligence service and the Afghan national police, according to a study released Monday by the United Nations here.

The report provides a devastating picture of the abuses committed by arms of the Afghanistan government as the American-led foreign forces here are moving to wind down their presence after a decade of war. The abuses were uncovered even as American and other Western trainers and mentors had been working closely with the ministries overseeing the detention facilities and funded their operations.

Acting on early draft of the report seen last month, NATO stopped handing over detainees to the Afghans in several areas of the country.

The report found evidence of “a compelling pattern and practice of systematic torture and ill-treatment” during interrogation in the accounts of nearly half of the detainees of the intelligence service, known as the National Directorate of Intelligence, who were interviewed by United Nations researchers. The national police treatment of detainees was somewhat less severe and widespread, the report found. Its research covered 47 facilities sites in 22 provinces.

“Use of interrogation methods, including suspension, beatings, electric shock, stress positions and threatened sexual assault is unacceptable by any standard of international human rights law,” the report said.

One detainee described being brought in for interrogation in Kandahar and having the interrogator ask if he knew the name of the office and then, after the man answered, “You should confess what you have done in the past as Taliban, even stones confess here.”

The man was beaten for several days for hours at a time with electric wire and then signed a confession, the report said.