On August 9, 1945, Nagasaki was the target of America’s second atomic bomb attack. At 11:02 a.m., the north of the city was destroyed and an estimated 70,000 people were killed by the bomb nicknamed “Fat Man.”

Over the years and decades that followed, thousands more died from a variety of radiation induced diseases. Even now, after more than six decades, many aftereffects persist, including leukemia, A-bomb cataracts, and cancers of thyroid, breast, lungs, salivary glands, birth defects, and disfiguring radiation burn scars.

The psychological damage arising from widespread chronic illness and the destruction of families and communities cannot be measured. 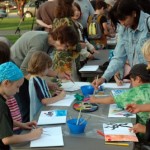 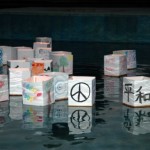 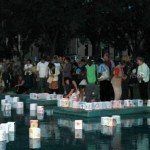 For many years, Winnipeggers have commemorated these tragedies and reaffirmed our commitment to peace and freedom from nuclear terror. We symbolize our commitment with a Lantern Ceremony.

The Lantern Ceremony is part of an ancient Buddhist Ceremony (O-Bon), that commemorates the lives of deceased loved ones. For many years around the world, this ceremony has been used on Hiroshima Peace Day to honour and embrace the memory of those who died because of the attacks.

During these ceremonies, participants are invited to design a lantern that represents their thoughts and feelings regarding personal losses, global concerns of peace, nuclear disarmament and any other issue relevant to keeping our planet safe.

In addition to lanterns, we make origami peace cranes to commemorate the story of “Sadako and a Thousand Paper Cranes.”

Sadako Sasaki, a 10-year old girl, became sick with leukemia from the effects of the atomic bomb in post war Japan. She believed in an ancient tale that if you made 1000 paper cranes, you would be granted a wish. She wished for good health.

She died before she completed making the cranes and her classmates completed the task for her. Each year, thousands of paper cranes from all over the world adorn the statue of Sadako in the Hiroshima Peace Park in Hiroshima, Japan.

As important as it is to commemorate the horrible tragedies of August 6 and 9, 1945, more is required of us to prevent a recurrence of this disaster. Nine countries are known to possess nuclear weapons (United States, Russia, United Kingdom, France, China, India, Pakistan, North Korea and Israel). Together, they possess an estimated 8,000 active nuclear warheads and more than 22,000 in storage. The explosion (accidental or deliberate) of only one of these weapons would cause unthinkable suffering and destruction.

The nuclear threat is too serious to be ignored. We cannot rest until each of these nuclear weapons has been dismantled.

How you choose to work for a nuclear free world is up to you. There are numerous options. Here a few of the many Internet resources available to help you get involved.

If you live in or close to Winnipeg, you should consider contacting any of the sponsors of Winnipeg Lanterns for Peace:

And, of course, you shouldn’t miss out on Winnipeg Lanterns for Peace 2011.

Finally, the Canadian Peace Alliance is a good source of information on peace groups across Canada. The important thing is to become informed and involved.