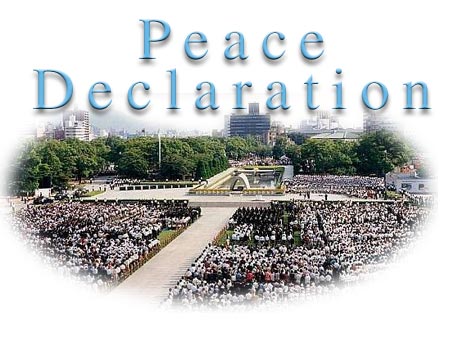 Sixty-six years ago, despite the war, the people of Hiroshima were leading fairly normal lives. Until that fateful moment, many families were enjoying life together right here in what is now Peace Memorial Park and was then one of the city’s most prosperous districts. A man who was thirteen at the time shares this: “August fifth was a Sunday, and for me, a second-year student in middle school, the first full day off in a very long time. I asked a good friend from school to come with me, and we went on down to the river. Forgetting all about the time, we stayed until twilight, swimming and playing on the sandy riverbed. That hot mid-summer’s day was the last time I ever saw him.”

The next morning, August sixth at 8:15, a single atomic bomb ripped those normal lives out by the roots. This description is from a woman who was sixteen at the time: “My forty-kilogram body was blown seven meters by the blast, and I was knocked out. When I came to, it was pitch black and utterly silent. In that soundless world, I thought I was the only one left. I was naked except for some rags around my hips. The skin on my left arm had peeled off in five-centimeter strips that were all curled up. My right arm was sort of whitish. Putting my hands to my face, I found my right cheek quite rough while my left cheek was all slimy.”

Their community and lives ravaged by an atomic bomb, the survivors were stunned and injured, and yet, they did their best to help each other: “Suddenly, I heard lots of voices crying and screaming, ‘Help!’ ‘Mommy, help!’ Turning to a voice nearby I said, ‘I’ll help you.’ I tried to move in that direction but my body was so heavy. I did manage to move enough to save one young child, but with no skin on my hands, I was unable to help any more. …‘I’m really sorry.’ …”

Such scenes were unfolding not just here where this park is but all over Hiroshima. Wanting to help but unable to do so—many also still live with the guilt of being their family’s sole survivor.

Based on their own experiences and carrying in their hearts the voices and feelings of those sacrificed to the bomb, the hibakusha called for a world without nuclear weapons as they struggled day by day to survive. In time, along with other Hiroshima residents, and with generous assistance from Japan and around the world, they managed to bring their city back to life.

Their average age is now over 77. Calling forth what remains of the strength that revived their city, they continue to pursue the lasting peace of a world free from nuclear weapons. Can we let it go at this? Absolutely not. The time has come for the rest of us to learn from all the hibakusha what they experienced and their desire for peace. Then, we must communicate what we learn to future generations and the rest of the world.

Through this Peace Declaration, I would like to communicate the hibakusha experience and desire for peace to each and every person on this planet. Hiroshima will pour everything we have into working, along with Nagasaki, to expand Mayors for Peace such that all cities, those places around the world where people gather, will strive together to eliminate nuclear weapons by 2020. Moreover, we want all countries, especially the nuclear-armed states, including the United States of America, which continues its subcritical nuclear testing and related experiments, to pursue enthusiastically a process that will abolish nuclear weapons. To that end, we plan to host an international conference that will bring the world’s policymakers to Hiroshima to discuss the nuclear non-proliferation regime.

The Great East Japan Earthquake of March eleventh this year was so destructive it revived images of Hiroshima 66 years ago and still pains our hearts. Here in Hiroshima we sincerely pray for the souls of all who perished and strongly support the survivors, wishing them the quickest possible recovery.

The accident at Tokyo Electric Power Company’s Fukushima Daiichi Nuclear Power Station and the ongoing threat of radiation have generated tremendous anxiety among those in the affected areas and many others. The trust the Japanese people once had in nuclear power has been shattered. From the common admonition that “nuclear energy and humankind cannot coexist,” some seek to abandon nuclear power altogether. Others advocate extremely strict control of nuclear power and increased utilization of renewable energy.

The Japanese government should humbly accept this reality, quickly review our energy policies, and institute concrete countermeasures to regain the understanding and trust of the people. In addition, with our hibakusha aging, we demand that the Japanese government promptly expand its “black rain areas” and offer more comprehensive and caring assistance measures to all hibakusha regardless of their countries of residence.

Offering our heartfelt condolences to the souls of the A-bomb victims, reaffirming our conviction that “the atomic bombing must never be repeated” and “no one else should ever have to suffer like this,” we hereby pledge to do everything in our power to abolish nuclear weapons and build lasting world peace.