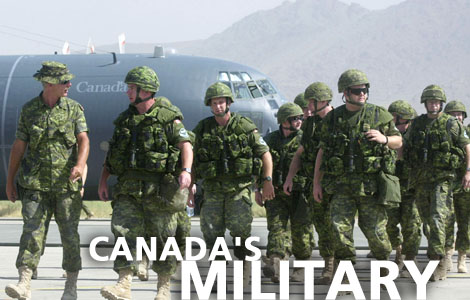 TORONTO — Canada has flexed its military muscles, first in Afghanistan for nine years alongside NATO forces and now in Libya in its supply of ships and combat planes for the rebel forces, but little debate has happened on the ground among Canadians themselves on this direction.

A recent summer opinion poll by Environics discovered that among priorities for Canadians, the economy or job creation factors as high as 29 percent, compared to health care at 13 percent, deficit reduction and cutting taxes tied at 6 percent, and defense and crime tied at a mere 4 percent.

Furthermore, 52 percent of Canadians told Environics the Conservative government should not purchase 65 expensive F-35 fighter jet aircraft, totaling at least $9 billion by Canadian government estimates, versus 37 percent who are in favor of a deal.

That division on the planes didn’t help the opposition Liberals, who put particular pressure on the Conservatives on the issue but ended up — for a variety of reasons, including leadership — being reduced to third party status in the May 2011 federal election. Here, the militarily hawkish Conservatives led by Stephen Harper won for the first time a majority of seats in the House of Commons.

A similar disconnect has happened in Afghanistan, with Canadians in ever larger numbers telling pollsters they oppose the involvement of their soldiers in NATO’s protracted battle against the Taliban insurgents. In one Ekos 2010 poll, it was 49 percent opposed, 36 percent in favor, and 14 percent with neither position.

But Afghanistan has not translated into a major issue either, even though one party, the social democratic New Democrats — now the official opposition since May — have consistently favored withdrawal of Canadian troops from the Central Asian country, notes defense analyst Philippe Lagassé, an assistant professor in the Graduate School of Public and International Affairs at the University of Ottawa.

Furthermore, the Canadian mainstream political parties, right and left, appear to have developed a common consensus on the necessity for increased defense expenditures, he said.

“I find that to be a very problematic notion simply because it does lead us down to situations like Afghanistan and like Libya, where all parties agree among themselves to be quiet and not say much,” Lagassé told IPS. “When everybody agrees then it is not necessarily a good thing for oversight and debate.”

Another defense analyst, Walter Dorn, an associate professor at the Canadian Forces College in Toronto, says the failure of NATO to bring the war to a conclusion in Afghanistan could result in Canada returning to participating in U.N. peacekeeping missions, in which the country has had considerable expertise since the 1950s.

“We’ve had this terrible experience in Afghanistan, 157 military personnel dead, and $20 billion spent,” he told IPS.

The difficult problems of debt and finance will force the governments of the United States and European countries like Britain and France to scale back defense spending and in the process “their military adventures,” Dorn suggested.

“The pendulum will start to swing back,” he predicted. “Canada will provide the forces when needed in the circumstances, and I think the U.S. will be much less interested in being involved in wars that [former U.S. president George] Bush launched [in Iraq and Afghanistan]. The budget cuts are going to be great throughout the Western world.”

But the Conservative government in Ottawa may stick with its current 2 percent annual growth expenditure for defense while trimming and even cutting other federal departments and programs, says David MacDonald, an economist with the Canadian Center for Policy Alternatives in Ottawa.