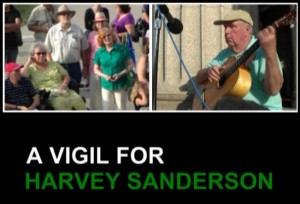 On August 3, 2011 – four days after being viciously assaulted in his Winnipeg apartment, Harvey Sanderson Junior died of his injuries. He was 27.

What made this crime especially shocking was that Harvey had brittle bone disease, a condition that confined him to a wheelchair.

Friends, neighbours and people who had never met him were saddened and horrified by Harvey’s murder.

And so, on August 12, they joined together with the Manitoba League of Persons with Disabilities to express their grief and their solidarity at a vigil for Harvey and all other persons with disabilities who are victims of violence.

The story does not end here. Within hours of Sanderson unconscious body being transported to the hospital, Winnipeg City Police arrested two suspects, Bobbi Melissa McKay and John Raven Ward, both 27, and charged them with aggravated assault and robbery. Following Sanderson’s death, police announced they were considering upgrading these charges.

The way in which a police spokesperson expressed this has raised red flags for local activists:

“Given the nature of the condition of the victim in this case, it’s something that has be looked at very carefully in consultation with the Crown’s office,” said Const. Rob Carver, spokesman for the Winnipeg Police Service.

The concern is that the Crown will prosecute McKay and Ward for aggravated assault, rather than murder, because of a misguided belief that Sanderson’s disability, rather than his beating, was the cause of his death. As Bonnie Bieganski said at the vigil:

“He was a healthy male with a disability. Yes, he had brittle bone disease but that disease does not require emergency brain surgery, the use of life support to sustain him nor induce a comatose state. Sanderson would be alive today if he had not been brutally beaten. The fact that the Crown will only upgrade the charges if it can be proven that it was the assault that killed Sanderson is an outrage.”

That Sanderson’s killing might be treated differently because of his disability is not an isolated or unrealistic concern. As we heard from several speakers at Harvey Sanderson’s vigil, vigilance is called for.