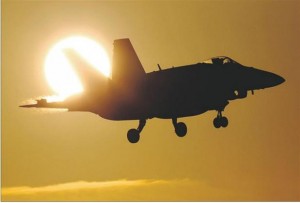 The Government of Canada is set to renew its support for the NATO led bombing of Libya, as the current three-month mandate expires on June 16. The Canadian Peace Alliance strongly condemns the ongoing NATO attacks that have killed hundreds of civilians in the country and calls on the Canadian government to end its support for the bombing.

Canada has already done 300 bombing runs and the cost of keeping planes, ships and more than 500 military personnel in Libya is at least $100 million a month according to retired Col. Michel Drapeau. Last week, it was reported that the Harper government had purchased an additional 1300 “smart bombs” for a total price of $130 million.

In total, NATO planes have been on more than 2500 bombing missions. We know from watching the bombings of Iraq and Afghanistan that civilians are inevitably caught in the crossfire despite claims that the bombings only target military facilities. Now British commanders are calling for a much more widespread bombing campaign against the infrastructure in Tripoli – a direct violation of the Geneva convention. NATO bombs have already targeted some infrastructure such as the bombing of a preschool for children with Down Syndrome.

The NATO intervention in Libya has nothing to do with supporting the legitimate struggle of the Libyan people for freedom and democracy. The attack on Libya has but one goal in mind – control of the Arab uprisings by western nations intent on the plunder of the resources of the region. The initial enthusiasm shown by some western countries has been tempered as of late, and divisions within NATO are now apparent. There was widespread belief that the war would be short and that Gadaffi would fall quickly. This has been proven false.

Each NATO bomb that is dropped helps to give Gaddafi the false aura of being an anti-imperialist fighter and both sides in the conflict are becoming more entrenched, resulting in a stalemate. NATO planners are scrambling to find a way out of this impasse and calls for boots-on-the-ground from some quarters are becoming ever louder.

There have been multiple proposals for a ceasefire by the African Union and Tripoli has agreed to talks. It is NATO that refuses to enter into any dialogue to stop the killing.