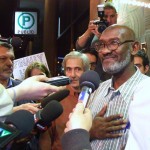 31 May 2011, Montreal — Abousfian Abdelrazik, a Montreal man whose story of torture and exile became a major scandal for the Canadian government in 2009, was refused child assistance benefits earlier this month. A letter from Québec’s Régie des rentes informed Mr. Abdelrazik that the application on behalf of his two children could not be processed because his name appears on the Security Council’s 1267 List.

“This is my children’s money. The sanctions don’t just apply to me, they are being applied to my kids as well. Why?” asked Mr. Abdelrazik.

“This is very troubling,” said Brian Aboud, a member of Project Fly Home, which has been supporting Mr. Abdelrazik’s struggle for justice since 2008. “Here we have a regime that violates the most fundamental human rights: indefinitely stripping people of their liberty without trial, charge, evidence, based on guilt by association – and the government in Quebec is going along with it!”

The letter from the Régie des rentes informs Mr. Abdelrazik that he will have to obtain an exemption from the Security Council’s 1267 Committee in order to get benefts for his children.

“It makes no sense that I have to ask an international Council based in New York for permission to feed my kids. But what can I do? I have no choice,” said Mr. Abdelrazik.

Mr. Abdelrazik fought to return to Canada after several years of arbitrary detention and torture in Sudan. A Federal Court of Canada judge was later to find that he was probably originally arrested in Sudan on the request of the Canadian spy agency, CSIS, which then sent two agents to interrogate him while he was in prison. His name appeared on the 1267 List shortly after he was released from prison in 2006 and this served as a pretext for the Canadian government to block his return to Montreal for several more years. Finally, the Federal Court ordered the government to bring him home in June 2009. Both CSIS and RCMP formally cleared Mr. Abdelrazik in 2007; throughout his whole ordeal he has never been charged with any crime.

“It is a huge shame that, after this terrible ordeal, and although he won his fight to return to Canada with a great deal of popular, legal and institutional support, he remains in this ‘prison without walls’ and still has to struggle for the most basic rights,” said Mr. Aboud.

In January 2011, Abdelrazik submitted a delisting request to the Security Council’s 1267 Committee. However, delisting is notoriously difficult, with no fair process and no obligation on the part of the Security Council to supply any reason for a refusal. Independently, court hearings in Abdelrazik’s constitutional challenge to the regulations implementing the 1267 Regime in Canada are expected to open in the fall. Meanwhile, Mr. Abdelrazik struggles for daily survival.

Delegation to New York in solidarity with Abdelrazik

In solidarity with Abousfian Abdelrazik, Project Fly Home is organizing a delegation to New York to visit the people who oversee the UN Security Council’s blacklisting regime. Abdelrazik’s name was arbitrarily placed on the Security Council’s blacklist in 2006, just after he was released from a second term of arbitrary detention and torture. Ever since, he has been subject to severe and indefinite sanctions, including an asset freeze and an international travel ban.

This is a critical time in Abdelrazik’s struggle for justice. Abdelrazik submitted a delisting request to the Security Council in January and could get a reply as early as September. Meanwhile, court hearings in Abdelrazik’s constitutional challenge to the regulations implementing the 1267 regime in Canada are expected to open early in the fall.

This is also a critical time in Canada to challenge the politics of fear and racism and all forms of political, social and economic repression, opposing them with our hope and solidarity.

–> ENDORSE THE LETTER. Encourage your organizations to endorse the letter that the delegation will deliver to the UN 1267 Committee: http://www.peoplescommission.org/files/abousfianMedia/solidarity_caravan_letter.pdf

–> DONATE. Project Fly Home is an all-volunteer organization and we rely on donations to cover our costs. Make your cheque out to “Réseau de la Commission populaire” with “Project Fly Home” in the memo line. Mail to: QPIRG McGill (Project Fly Home), 3647 University St., 3rd Floor, Montreal, Quebec H3A 2B3.

← Stop the extension of the war in Libya
Project Peacemakers Forum – Israel and Palestine: What is going on and what can we do? →