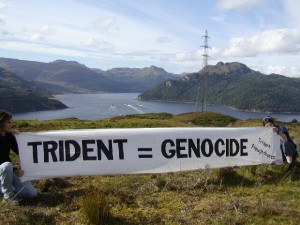 Five days after my first birthday the Enola Gay bombed Hiroshima. When I was 24, I was a bombardier-navigator in a nuclear crew aboard a British aircraft carrier. We were given a target: a military airbase near Leningrad. We had to plan how to get from the Norwegian Sea by the shortest route, deliver a tactical nuclear bomb, and then try to get back to our carrier. There would not be enough fuel because the target was at the limit of our aircraft’s range, but my pilot shrugged and said: “Well, Rob, if we ever have to do this, by then there won’t be anything to go back for.” So we submitted our flight plan and celebrated our initiation into the nuclear elite.

Thirty years later, I would attend an anti-nuclear conference in St. Petersburg. On TV that evening, I would apologize to the citizens of Russia’s ancient capital.

Back in 1972, I was senior bombardier-navigator of a Sea King helicopter squadron aboard the aircraft carrier HMS Ark Royal. Our task was to detect and destroy enemy submarines threatening our ships. However, our torpedoes could not catch the latest Soviet nuclear-powered submarines, so we were given a nuclear depth-bomb.

The problem was that, if I had dropped one, it would have vaporized and irradiated one Soviet nuclear submarine, a large volume of ocean—and myself. A helicopter was too slow to escape before detonation, so it would have been a suicide mission. Also, my leaders ignored the radioactive fallout from my bomb, the submarine’s nuclear power plant, and any nuclear-tipped torpedoes it carried. I might even have turned World War Three into a nuclear holocaust, just to protect my aircraft-carrier.

This time I did complain. I was reassured there would almost certainly be no need to use nuclear depth-bombs. No civilians would be involved; and the Soviets might not even detect it. Besides, I had a glittering career ahead of me, and did not want to spoil my prospects. As I was ambitious, I fell silent. In due course, I was promoted.

However, the military irresponsibility shocked me into a more questioning frame of mind. I recalled Tennyson’s Crimean war poem The Charge of the Light Brigade, about an earlier suicide mission: “Theirs not to reason why, theirs but to do and die.” That attitude was alive and well in the Royal Navy.