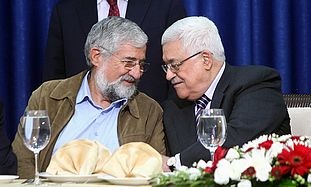 By Karin Laub and Mohammed Daraghmeh, The Associated Press, Dec. 19, 2010

Palestinian President Mahmoud Abbas hosted dozens of Israeli legislators and activists Sunday, and urged them to relay a simple message to the Israeli public — he is serious about negotiating a peace deal and that the Palestinians will never again resort to violence.

The outreach from Abbas comes at a time when peace efforts seem hopelessly stuck. Israeli Prime Minister Benjamin Netanyahu’s government refuses to freeze settlement construction, while Abbas says he can’t negotiate without such a halt.

U.S. mediators, meanwhile, have not come up with a plan for breaking the deadlock over the settlements, and have not presented a way forward that seems acceptable to both sides.

With talks on hold, the Palestinians are pursuing parallel strategies to improve their leverage, including seeking international recognition of a Palestinian state in the West Bank, Gaza and east Jerusalem, the territories Israel captured in 1967.

Such recognition, while largely symbolic in the absence of a peace deal, is meant to affirm the 1967 borders at a time when Netanyahu refuses to recognize them as the baseline for negotiations. Netanyahu has not presented his own border proposal, but has said he will not agree to withdraw to the 1967 frontier.

Reaching out to Israeli public opinion is also part of the Palestinian strategy, apparently in hopes of generating some pressure on Netanyahu.

Sunday’s meeting at Abbas’ West Bank headquarters was attended by about 100 Israeli Jews, including members of parliament, peace activists and journalists. The legislators were from Labor, Kadima and Meretz, the three Israeli parties that support the creation of a Palestinian state alongside Israel.

The Palestinian president told the visitors that peace is possible.

“We are ready to conclude peace, to have our state in the 1967 borders, with agreed (land) swaps, to have security, a third party in our territories for a while, agreed upon,” he said. “We will find solutions to the other remaining … core issues.”