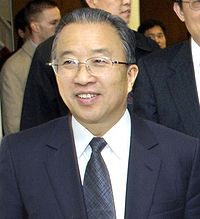 In a major 9,000-word essay published on the Chinese foreign ministry’s web site on December 6, State Councilor Dai Bingguo (whose rank is equal to vice premier) declared that Beijing would never seek to replace the US as the world’s dominant power. The essay was designed to placate the American ruling elite, which is engaged in an aggressive campaign throughout Asia to combat China’s rise.

“The notion that China will overtake the US and dominate the world is a myth,” Dai wrote. “Our fundamental policy and strategy is to not take the lead and not seek hegemony.” In an attempt to counter US criticism of Beijing’s “secretive” intentions, especially its military buildup, Dai insisted: “China’s so-called strategic intent is not as complicated and abysmal as some people imagine—as if we have some secret agenda and ambitions.” He said China’s strategic goal of “peaceful development” would not change, even in 1,000 years.

Dai argued that under conditions of globalisation, “the rise of a power can be fully achieved through equal, ordered and mutually beneficial international competition and cooperation”. He added: “The experiences and lessons of the rise and fall of some powers taught us that we cannot follow the road of expansionism, and arms races.”

Dai said China would not seek a “Monroe Doctrine” in Asia—referring to the 19th and 20th century US policy to exclude rival powers from South and Latin America—“nor compete for dominance in our region with other countries”. He promised that China would be “a good friend, good neighbour and good partner” for Asian countries, especially members of the Association of South East Asian Nations (ASEAN).

Beijing published the essay amid sharpening tensions on the Korean peninsula, after the November 23 artillery exchange between the two Koreas. The Obama administration has increasingly accused China of being responsible for North Korea’s supposedly “rogue” behaviour. Large-scale joint US military exercises with South Korea and Japan have sent a threatening message to the Chinese regime. In addition, the US and its allies have rejected China’s proposal to resume six-party talks over North Korea to ease frictions.

The US diplomatic cables published by WikiLeaks have also revealed active American discussion about preparing for war against China. Expressing concern that China held $2 trillion in US currency assets, including US government debt, Secretary of State Hillary Clinton asked Australian Prime Minister Kevin Rudd in 2009: “How do you deal toughly with your banker?” Rudd replied that if China could not be integrated into the US-led Asia-Pacific order, Washington and its allies would have to use force against Beijing.