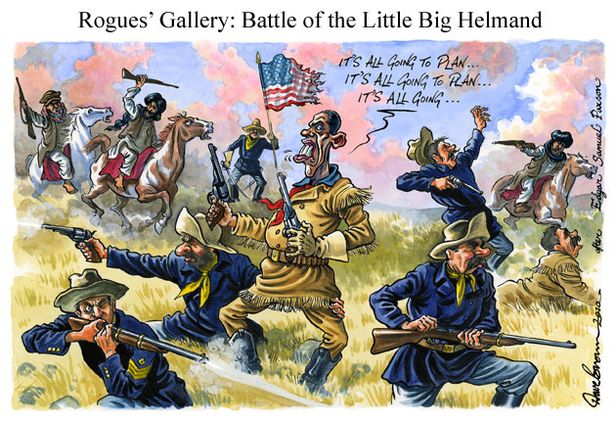 One hears again and again Afghans say that the Taliban may not be liked but that the US is distrusted, even hated.

During the mid-1960s, America’s goal during a crucial stage in the Vietnam war was to defeat the enemy militarily. But it had no realistic political strategy to underpin the goal, and it was this which ultimately led to failure.

America’s strategy in Afghanistan is now suffering from a similar weakness. Barack Obama made the edgy claim this week that the US army is stabilising the military situation, but neither he nor his national security advisers show any signs of understanding the speed at which,politically, the US is losing ground.

Again and again in Kabul one hears Afghans say that the Taliban may not be liked, but that the Afghan government and its US allies are increasingly distrusted, even hated, by the mass of the population. It is this rapidly increasing disaffection, underestimated by foreign governments, that enables a maximum of 25,000 Taliban to hold their own against 140,000 US-led foreign troops in addition to the Afghan government’s army and police. Instead of giving priority to seeking a feasible political approach, the current US strategy is to eliminate the Taliban as an effective military organisation. American generals claim they are beginning to turn the tide by an offensive against enemy strongholds in southern Afghanistan and through the systematic killing of local Taliban commanders by US special forces.

Body counts of enemy dead, a notorious and discredited measure of success in Vietnam, are back in favour. The US military proudly announced this week that it had killed 952 Taliban and captured 2,469 in the 90 days up to the beginning of December. One general boasted: “Every 24 hours on average, we’re killing three to five mid-level enemy leaders.”

Bizarrely, it is the US commander in Afghanistan, David Petraeus, who is leader of this campaign which aims for success through military force alone. Yet it was General Petraeus, lauded as the architect of the military surge in Iraq, who emphasised that in counter-insurgency the US cannot kill its way to victory. As the author of the much-praised field manual for the US armed forces, he stated that success in counter-insurgency is four-fifths political and only one-fifth military action.

There have been important changes on the ground in Afghanistan over the past year, but many of them have been in favour of the Taliban. As US forces concentrate on the south, the Taliban have taken over swathes of territory in northern and eastern Afghanistan, far from their areas of core support. Kabul is a peaceful island but all the roads in and out are cut or vulnerable to attack.