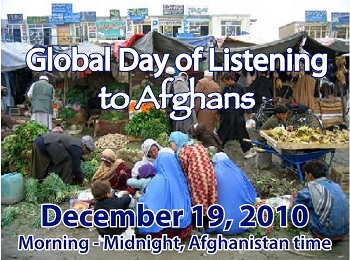 Inspired by the Afghan Youth Peace Volunteers and Afghans For Peace this GLOBAL DAY of LISTENING will allow everyone to listen to the stories told by the Afghan People of what it is like to live now in Afghanistan.  Anyone interested in talking with those gathered in Kabul and Bamiyan may now request a time to speak during this Day of Listening.  You may listen at any time via conference call-in or Skype!  Reference the Details Page and request a time to speak through email.

The Purpose of the day-long teleconference is for LISTENING:

1. To the PEOPLE : to ordinary Afghans, to ordinary internationals, including others from war-torn countries, and to world public opinion.

2. To the PAIN (anger, grief, disappointment) of the people :

– the world public whose opinion is swinging against the Afghan War

– read the Open Letter to our World Leaders,

– and We Want You Out – you may sign the petition here.

– the pro-war people who have their concerns, with the understanding that most Afghans are now anti-war.

3. To The People’s Afghanistan December Review

2 comments for “Global Day of Listening to Afghans”