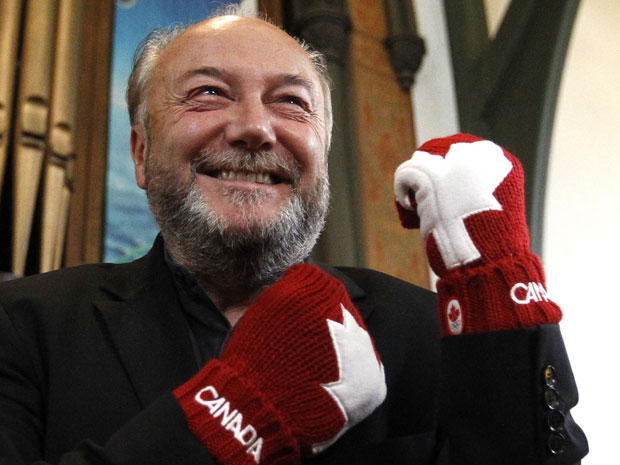 Galloway, who said he fought in his youth, wore the mittens as if they were boxing gloves and urged Jason Kenney to “go five rounds with me.”

“Jason Kenney, you can run, but you can’t hide,” Galloway said to cheers from boisterous crowd of 500 spectators who packed a Toronto church to hear him speak.

The cheers from the balcony were often so loud they drowned out Galloway’s forceful voice. The audience members stood up to give him several standing ovations.

Galloway also challenged Kenney to a public debate and said he would be prepared to stand outside the minister’s constituency office in Calgary, and follow Kenney across Canada until he gets one.

He said his lawyers were processing papers to make good on a threat to sue Kenney alleging he was slandered in front of the world by branding him a terrorist.

“Let me make this clear, I am not, nor have I ever been a terrorist or a supporter of terrorism or any kind of security threat to Canada,” he said.

“But I think I am a threat to Jason Kenney’s political career, and I intend to continue to be so until he’s gone.”