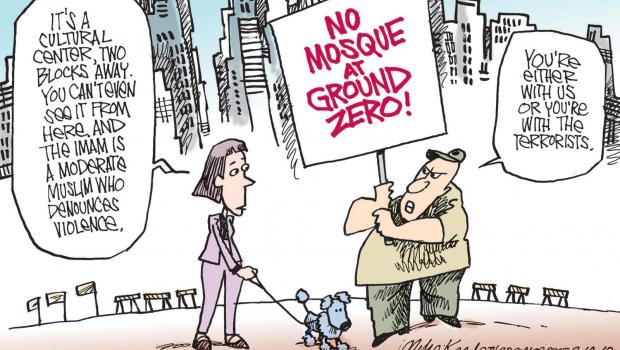 Shame on America, Jews and the ADL

To begin, the mosque controversy does not involve a mosque. It is planned as a 13-story community center encompassing a swimming pool, 500-seat performing arts center, gym, culinary school, restaurant and, yes, a prayer space for Muslims, which already exists in the current building.

A formal mosque would forbid eating or the playing of music on the premises. I guess that we are now at the point in America where Jews can have our JCC’s and Christians their YMCA’s, but Muslims are not wanted.

There is also the controversy over the proposed name, Cordoba House. The hate-mongers have described this as a reference to Muslim designs to attack western culture, hearkening back to the Muslim-Christian wars of domination in medieval Spain. The name was chosen for precisely the opposite reason. In the tenth century Cordoba was the center of the most liberal and sophisticated Caliphate in the Islamic world. All religions were not merely tolerated but respected.

The caliph, Abd al-Rahman III, had a Jew as his foreign minister and a Greek bishop in his diplomatic corps. He also had a library of 400,000 volumes at a time when the largest library in Christian Europe numbered merely 400 manuscripts. There were also 70 other smaller libraries in Cordoba. The very reference to Cordoba reflects the sophistication and liberality of the Muslims behind this project. They have changed the name of the center to the address of the building, Park 51, to deflect criticism. This was unfortunate, since nothing will quiet a hate-monger.

Feisal Abdul Rauf, the Imam behind the proposed community center, has been attacked as an Islamic terrorist, even though he is a practitioner of Sufi Islam, which reaches out to all other religions as manifestations of the Divine. My God, the conservative Bush administration utilized Rauf as part of an outreach to the Muslim world. You can bet your life that he was thoroughly vetted by our government. He is currently being used by the Clinton State Department as well in the same capacity. Fareed Zakaria of Newsweek and CNN succinctly put it, “His vision of Islam is bin Laden’s nightmare.”