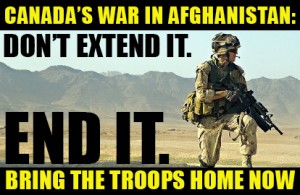 Join Peace Alliance Winnipeg, and thousands of Canadians across the country in urging Parliament to end Canada’s role in the military occupation of Afghanistan. That means “ALL TROOPS HOME!” Forget the baloney about military training that the Conservatives and Liberals have been floating, and the NDP has yet to definitively oppose.

We will be collecting signatures on a petition and handing out information and postcards. Please join us.

Background from the Canadian Peace Alliance

Join the day of action on September 25th
Tell Parliament – Don’t Extend It. End It.

Almost 80 per cent of Canadians want the troops home by 2011, yet the Conservative government and Liberal opposition have indicated that they may work together to extend the mission.

While the Harper government has been typically vague about it’s intentions, they have always left the door open to a possible extension. The Liberals have been much more vocal in their support for continuing the mission. With the US General David Patraeus calling for 2000 more NATO soldiers, the pressure will remain on Canada to increase its commitment to the war.

Over the next few months there will likely be a debate in the House of Commons about Canada’s role in Afghanistan post 2011. The peace movement in Canada needs to make sure that our politicians feel the pressure to bring the troops home. If there is no opposition, then the Conservatives and Liberals will extend the mission.

On September 25th – the first Saturday after Parliament resumes – there will be actions across the country calling for the troops to be brought home. Join us to demand that our politicians listen to the wishes of the Canadian people.

The cost of the war in Afghanistan has already reached $28.5 billion and the Conservatives have already said they will need more money to extend the mission. They are also planning on spending $16 billion on new F-35 fighter jets. In the context of an economic crisis, spending billions on war is a foolhardy use of our resources.

We don’t know what the role of the Canadian Forces will have in Afghanistan after 2011, but any Canadian presence, including military “trainers” will be seen as part of the foreign occupation, providing legitimacy and support to the corrupt warlord-led government.

The situation for the Afghan people continues to deteriorate. Civilian deaths rise each year with 2009 being the most violent since the invasion in 2001. Each new deployment of soldiers results in more civilian deaths and a rise in the resistance to the war.

Join the actions on September 25

Order your Don’t Extend it. End It. postcards. Send us a message at cpa@web.ca to order.

← Another take on the so-called “Ground Zero Mosque”
Rhetoric about Iran a repeat of Iraq War propaganda? →