Join us as we mark the International Day of Peace with an ecumenical worship service, followed by a screening of the film “The Storytelling Class” and discussion led by Harold Neufeld. 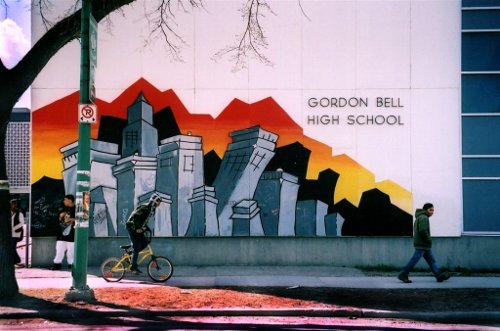 Veteran Winnipeg documentary photographer and filmmaker John Paskevich (Ted Barlyuk’s Grocery, The Gypsies of Svinia) and filmmaker John Whiteway have created a remarkably poignant new film about the healing power of storytelling based on a workshop initiated by Marc Kuly, a dynamic young teacher at Gordon Bell. Based on his students reading a new book by author Ishmael Beah about his one time experience as a child soldier in Sierra Leone’s civil war Kuly, initiated an after-school storytelling project whereby the immigrant students would share stories with their Canadian peers.

Located in Winnipeg’s downtown core, Gordon Bell High School is probably the most culturally varied school in the city. One recent survey found 58 different languages spoken by the student body. A large percentage of this diverse population is made up of children who have arrived as refugees from various war torn areas of the world. Traumatized by violence and displacement and experiencing culture shock in Canada, these immigrant children face challenges that are not easily understood by their Canadian classmates. In an effort to build bridges of friendship and belonging across cultures and histories, Documentary filmmakers John Paskievich and John Whiteway brought a camera into the classes so we see and hear some remarkably poignant stories of how the students see their lives and the stories they can tell.