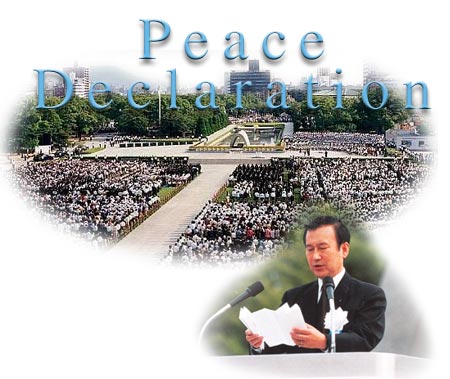 By Tadatoshi Akiba, Mayor, The City of Hiroshima, August 6, 2010

In the company of hibakusha who, on this day 65 years ago, were hurled, without understanding why, into a “hell” beyond their most terrifying nightmares and yet somehow managed to survive; together with the many souls that fell victim to unwarranted death, we greet this August sixth with re-energized determination that, “No one else should ever have to suffer such horror.”

Through the unwavering will of the hibakusha and other residents, with help from around Japan and the world, Hiroshima is now recognized as a beautiful city. Today, we aspire to be a “model city for the world” and even to host the Olympic Games. Transcending the tortures of hell, trusting in the peace-loving peoples of the world, the hibakusha offer a message that is the cornerstone of Japan’s Peace Constitution and a beacon to the world.

The results of the NPT Review Conference held this past May testify to that beacon’s guiding influence. The Final Document expresses the unanimous intent of the parties to seek the abolition of nuclear weapons; notes the valuable contribution of civil society; notes that a majority favors the establishment of timelines for the nuclear weapons abolition process, and highlights the need for a nuclear weapons convention or new legal framework. In doing so, it confirms that our future depends on taking the steps articulated by Hiroshima, Nagasaki, the more than 4,000 city members of Mayors for Peace, and the two-thirds of all Japanese municipalities that formally supported the Hiroshima-Nagasaki Protocol.

That our cry of conscience, the voice of civil society yearning for a future free from nuclear weapons, was heard at the UN is due in large measure to the leadership of His Excellency Ban Ki-moon, who today has become the first UN Secretary-General to attend our Peace Memorial Ceremony. President Obama, the United States government, and the 1,200-member U.S. Conference of Mayors also wielded their powerful influence.

This ceremony is honored today by the presence of government officials representing more than 70 countries as well as the representatives of many international organizations, NGOs, and citizens’ groups. These guests have come to join the hibakusha, their families, and the people of Hiroshima in sharing grief and prayers for a peaceful world. Nuclear-weapon states Russia, China and others have attended previously, but today, for the first time ever, we have with us the U.S. ambassador and officials from the UK and France.

Clearly, the urgency of nuclear weapons abolition is permeating our global conscience; the voice of the vast majority is becoming the preeminent force for change in the international community.

To seize this unprecedented opportunity and actually achieve a world without nuclear weapons, we need above all to communicate to every corner of our planet the intense yearning of the hibakusha, thereby narrowing the gap between their passion and the rest of the world. Unfortunately, many are unaware of the urgency; their eyes still closed to the fact that only through luck, not wisdom, have we avoided human extinction.

Now the time is ripe for the Japanese government to take decisive action. It should begin to “take the lead in the pursuit of the elimination of nuclear weapons” by legislating into law the three non-nuclear principles, abandoning the U.S. nuclear umbrella, legally recognizing the expanded “black rain areas,” and implementing compassionate, caring assistance measures for all the aging hibakusha anywhere in the world.

In addition, the Prime Minister’s wholehearted commitment and action to make the dreams of the hibakusha come true would lead us all by 2020 to a new world of “zero nuclear weapons,” an achievement that would rival in human history the “discovery of zero” itself. He could, for example, confront the leaders of the nuclear-weapon states with the urgent need for abolition, lead them to the table to sign a nuclear weapons convention, and call on all countries for sharp reductions in nuclear and other military expenditures. His options are infinite.

We citizens and cities will act as well. In accordance with the Hiroshima Appeal adopted during last week’s Hiroshima Conference for the Total Abolition of Nuclear Weapons by 2020, we will work closely with like-minded nations, NGOs, and the UN itself to generate an ever-larger tidal wave of demand for a world free of nuclear weapons by 2020.

Finally, on this, the 65th anniversary of the atomic bombing, as we offer to the souls of the A-bomb victims our heartfelt condolences, we hereby declare that we cannot force the most patiently enduring people in the world, the hibakusha, to be patient any longer. Now is the time to devote ourselves unreservedly to the most crucial duty facing the human family, to give the hibakusha, within their lifetimes, the nuclear-weapon-free world that will make them blissfully exclaim, “I’m so happy I lived to see this day.”