Open Letter to Christian US Troops in Iraq and Afghanistan

Confession of faith and renunciation of evil

On February 1, 1996, I retired from the United States Army. I had served in the 173rd Airborne Brigade in Vietnam as an infantryman, the 82nd Airborne Division, the 4th Infantry Division, 2nd Ranger Battalion, the Jungle Operations Training Center, 1st Special Forces Operational Detachment – Delta, the United States Military Academy at West Point, 1st Ranger Battalion, 7th Special Forces Group, 75th Ranger Regiment, and finally 3rd Special Forces Group. I worked all over “hot spots” in Latin America during the 80s and early 90s. I participated in Grenada and Somalia; and I was the team sergeant for a Special Forces A-Detachment during the 1994 invasion of Haiti.

In all that time, I was one of those atheists in the foxholes they say don’t exist. I could never have known that I’d find the faith to follow Christ and be baptized on Easter of my 56th year. But I did, even when I’d never grasped for spiritual reassurance as I slogged through the Central Highlands of Vietnam, leapt from airplanes into the night, or had helicopters shot out from under me. I’ve been taking up residence close to death for a long time. My faith isn’t about jumping over death. It’s about reconciling with God, who Jesus Christ showed us is Love.

When I was baptized I continued to carry my history; but one identity was sloughed off in the water and a new one born out of it.

I write this open letter to troops, brothers and sisters — of all branches — who profess the faith of Christ. I write you to ask that you remember your baptism, because at that baptism you declared your renunciation of evil. 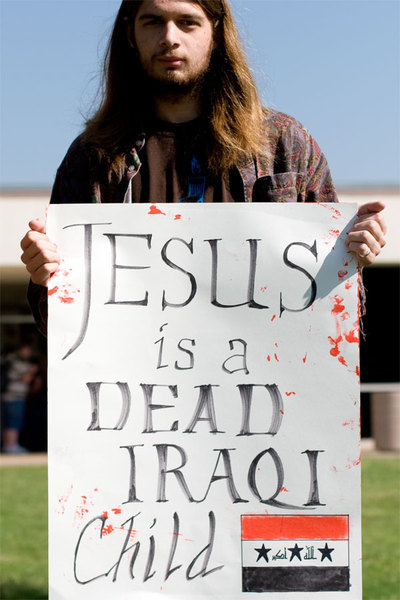