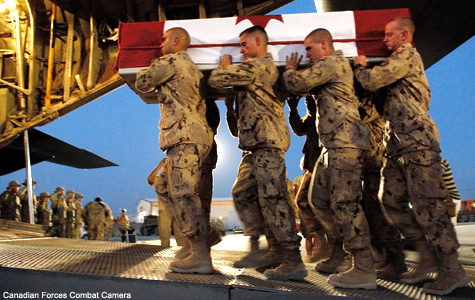 Stephen Harper said today that Canadian soldiers will be withdrawn from Afghanistan by 2011. This contradicts previous statements by the Harper government that have alluded to another possible extension past 2011. Harper claims that Canadians will have lost the appetite for war in three years from now. The reality is that Canadians lost the appetite for war a long time ago. Just weeks after Harper last extended Canada’s mission on March 13, 2008, an Angus Reid poll showed that 58 per cent of Canadians believed it was the wrong decision.

That sentiment is still growing. A clear majority of Canadians want the war to end, now – not in three years. At current rates, thousands more Afghan civilians will be killed, and many more will be detained and tortured. Nearly 100 Canadian soldiers have been killed in combat so far. That number could more than double if we wait three more years to leave Afghanistan.

How many more Afghan detainees will be transferred to torture? How many more massacres – like the recent air strike at Azizabad – must Afghan civilians suffer? And how many more Canadian families will bury their sons and daughters before Stephen Harper stops playing politics with other people’s lives?

Harper’s claim to withdraw troops in 2011 is an attempt to stifle debate about the war during the election campaign. The Conservatives and the Liberals are worried about the growing death toll of Canadian troops in Afghanistan, and the growing anger among Canadians. Neither party wants to take responsibility for sending troops into harm’s way, in a war that we cannot win.

Stephen Harper promised a “fixed date” for federal elections – then abandoned this commitment at his convenience. How can Canadians believe his promise of a fixed date to bring our troops home. Harper has now twice extended the Canadian mission in Afghanistan past so-called “fixed dates”. He has committed to spend a $490 billion on the military budget over the next 20 years – a huge financial burden Canadian taxpayers will shoulder long after Harpers “guaranteed” withdrawal date.

On October 14, cast your ballot for candidates that will end the war in Afghanistan, and bring the troops home now – not in another three years. And on October 18, join us in the streets to send the same message to whichever party forms the government.

We can’t afford another three years of war. Tell that to Stephen Harper: end the war in Afghanistan, and bring the troops home now!

← What would Jesus think?
Harrowing video backs Afghan villagers’ claims of carnage caused by US troops →