Israel’s Blockade has reached the shores of Europe

We Will Not Let Israel Control Gaza or International Water 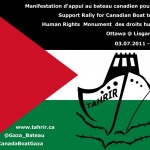 We are calling on supporters to hold public demonstrations and to contact Greek, Israeli and Canadian government representatives. We urge that Greece not become complicit in the illegal actions of Israel.

Here are some of the things that you can do to help:

– Public rallies, vigils, etc: We hope for Saturday actions. But please, do whatever and wherever you are able. We need this to be big. We need to be visible. (A rally is planned in Winnipeg on Saturday, July 2, at the corner of River Avenue and Osborne Street.)

– Letter to our Canadian MPs: We have a letter template for you to use to send to MPs reminding them that the Canadian government has obligations under the Geneva Convention.

– Contacting Greek officials: Greek government officials are to be asked to clarify whether a political decision has been made by the Greek government in response to Israeli and other governments’ pressure. We will ask that they not be complicit in the massive human rights violations by Israel against the people of Gaza. We will ask them to defend human rights and not fall to the pressure of Israel and other governments – who are playing with the lives and livelihoods of Greeks and Palestinians.

We have a template letter to use and contact information for Greek officials in Canada and in Greece. Contact details below for Greek Consulates and Embassy in Canada

Dear [NAME of MP in your riding]:

I am writing to you as a concerned Canadian about the alarming news that vessels bound for the Gaza Strip are being prevented from leaving Greek ports, despite their compliance with all legal expectations. One of those vessels is the Canadian ship, the Tahrir, with Canadian passengers on board. The Tahrir is part of the Fredom Flotilla 2 – Stay Human.

The Freedom Flotilla is an international initiative with the goal of challenging the illegal blockade of Gaza, and bringing humanitarian aid to the civilian population of Gaza in the spirit of the U.N. Security Council Resolution 1860 (2009).  The Canadian boat is carrying much needed medical supplies.   All delegates on the Freedom Flotilla, including the Canadian Boat, the Tahrir, are committed to peaceful and non-violent action.   The Flotilla and the Tahrir are not breaking the law but are actively upholding international law.

I am concerned at the lack of port security in Greece that allowed the sabotage of two vessels –  one Irish and the other Swedish-Greek-Norwegian – with potentially serious consequences for the passengers of those vessels. But I am outraged that the Tahrir is being prevented from leaving the Greek port while all legal documents are in order for it to sail.

As the MP of my riding I urge you to speak out in Parliament for the legitimate right of those Canadians on the Flotilla to express their solidarity with fellow Palestinians in Gaza, as well as

I look forward to hearing from you what actions you have taken on the above.

LETTER TO GREEK OFFICIALS IN CANADA AND IN GREECE

I am writing to you as a concerned Canadian citizen who has just learned that the Canadian Boat to Gaza, The Tahrir, is being prevented from leaving its port in Greece.  This boat carries passengers from Canada, Australia, Belgium, Denmark, Germany, Russia and Israel, and is part of the Fredom Flotilla 2 – Stay Human.

The Freedom Flotilla is an international initiative with the goal of ending the illegal blockade of Gaza and to bring humanitarian aid to the civilian population of Gaza in the spirit of the U.N. Security Council Resolution 1860 (2009). The Tahrir is carrying much needed medical supplies to the people of Gaza.

While your country has been very welcoming by allowing the Flotilla to use various Greek ports, I am appalled that the ships have not been permitted to set sail in spite of the fact that they meet all the legal requirements to sail.  I am also appalled at the lack of port security that allowed the sabotage of two vessels –  one Irish and the other Swedish-Greek-Norwegian – with potentially serious consequences for the passengers of those vessels.

The various administrative steps taken by your government, including unnecessarily meticulous inspections, and the most recent detention of the Tahrir are preventing the departure of the Flotilla.

It is my understanding that the Tahrir has no legal or other impediment to leave port.

I would regard any actions by your government trying to block any vessels in the flotilla from leaving a Greek port and/or reaching the Gaza Strip as an overt collaboration with the illegal blockade imposed by Israel.

I urge the Greek government to immediately allow the Tahrir and all other ships in the Freedom Flotilla to set sail.